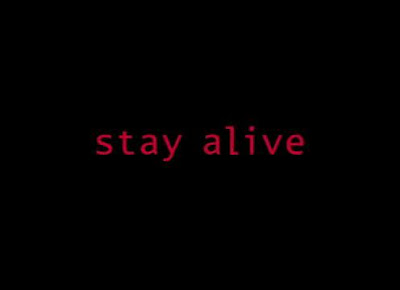 Released around the time Japanese horror movies were focusing their creative energies on stories about cursed objects, Stay Alive (2006) did to video games what movies like The Ring (1998) and One Missed Call (2003) did to VHS tapes and telephone calls respectively: get involved somehow and you die. The key difference between these Asian fright flicks and Alive, however, is that while the former did their best in the scare department and mostly succeeds, Stay Alive has scares comparable to someone clapping behind you without your knowing, only for them to do it over and over again for the next 80 plus minutes.

While attending his adoptive brother-slash-bestfriend Peter's wake, Hutch comes into possession of an underground game called Stay Alive which Peter was testing before he bit the big one along with two others. In memoriam to his late bro, Hutch invites his dorky gamer friends (one of whom played by Frankie Muniz of the Malcolm in the Middle fame) to play the mysterious demo, not knowing that by reciting a prayer to start the game, they have also unleashed the game's villain unto themselves in real life. Now, whenever one of them dies at the game, they'll meet a similar grisly fate no soon after (similar to a certain nightmare man named Kruger's motive), thus forcing these kids to uncover the secrets behind the game before its too late.

Asinine and predictable, Stay Alive (2006) really didn't do much of an effort to make itself a worthwhile horror flick, may it be scare factor, emotional turmoil or even creativity for its bodycount. (Offscreen. Why must the gorier deaths be offscreen?) The CGI villains may look pitiful and the backstory behind their existence just didn't make much sense, a failing factor that doesn't help the sloppy direction and lackluster I'm-trying-to-be-serious-but-really-I'm-all-bull tone of the movie. (Apparently the villainess is Elizabeth Bathory, who founded a plantation in Louisiana in the 1800s where she tortured many girls for her oh-so-beloved literal bloodbath, which the game's premise is based on. Doesn't add up, however, since Miss Bathory's  already dead before the USA even existed...)

If there's anything good to say about Stay Alive (2006) is that I really dig the game featured. It's supposed to be very advanced with voice-activation and a very open-world to explore and survive at, with on-and-off co-op gameplay and decent character customization. Any gameplay shown in the movie does look fun to play and I wouldn't mind taking a swing at it myself if it ever existed. Aside from this, the movie is plainly forgettable and barely staying alive as a fright flick...

Bodycount:
1 male found hung up in chains dead
1 female found slaughtered
1 male hanged with a length of chain
1 male stabbed to death offcamera
1 male ran down by a phantom horse carriage
1 female caught inside a burning house, dies from smoke inhalation (flashback)
1 male had his head slaughtered offcamera, blood splash seen
1 female had her throat slashed with a pair of shears
Total: 8
Posted by Kaijinu at 2:10 PM