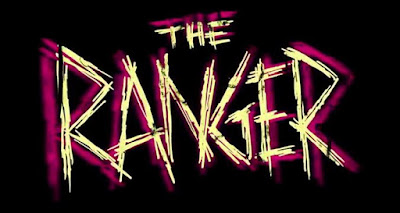 Backwood slashers. Many's the films I've seen with this backdrop and I'm sure there will be many more in the future, so I often take heed of what I would subject my eyes to in this day and age as a slasher fan. Will the next backwoods slasher be a dime a dozen masterpiece or a predictably clichéd trip down a familiar bloodstained forest?

Well, why not look into it first once in awhile and give me some idea of what I could be getting myself into?

This is what I did for The Ranger (2018) after hearing and reading about its festival run and a few favorable reviews. I was hoping to see it one day and find out if the hype was well worth the trouble, so when it finally came out available for viewing, I hesitated not and, well, let's just say I am glad it at least didn't made me fall asleep halfway.

When the show they're attending gets raided by cops one night, Chelsea and her punk rocker friends drive off to her late uncle's cabin to hide after her boyfriend Garth stabs one of the lawman to save her. There, they run into the titular forest ranger who appears to have some history with Chelsea and is quick to dislike the new crowd she's hanging out with. The encounter, while troubling, seems to be done and over with no soon after so most of the gang more or less thought nothing of it. Most of the gang.

While her friends and boyfriend punk out mother nature with spray paint, hard rebel rock and drugs, Chelsea finds herself face to face with a troubling memory involving her uncle and the ranger, but before we could uncover more, shots are fired and one of her friends goes down with an increasingly fatal neck wound. The remaining kids are soon forced to hike back to the edge of the woods only to discover their van missing and the only help left for them is the local ranger they encountered earlier.

Problem with this, though -and this is an very obvious problem- the ranger doesn't like them. Like on a we're the wolves and they're the sheep homicidal level. So it isn't long before Chelsea's friends starts biting it and she's left to fend for herself.

The Ranger (2018) runs its first half hour considerably watchable at most with its decently directed stroll into punk culture and PTSD, with a fun-sized mystery focusing on the relationship between the creepy ranger and our obvious final girl steadily unfolding throughout. The fact that a lot of the characters each have a varying level of assholeness does qualm my enjoyment for the film a bit (most of them were tolerable for punks, dare I even say likeable for their strong bond, yet there's always that one guy you really want to suffer a slow or very brutal onscreen death), the biggest offender that really knocked this film down a few steps back, though, is how the middle act is basically a retread of pretty much any backwoods slasher flick out there.

Granted that one or two kills were eye-candy practical, bloody and gory, this doesn't do much to set the movie's generic forest-based bodycounting antics apart from others like it, even more so when the characters devolve from loud yet somewhat passable troublemakers into horror movie bad decisions incarnate and getting offed way too soon. Thankfully, the last act didn't made it any worse (though a far cry from making it a rave-worthy masterpiece neither) as The Ranger (2018) decided to end on a bloodstained note as the titular homicidal lawman tries to worm his philosophy of being hunters and other righteous ramblings to a drugged and captured Chelsea, only for her to exact brutal vengeance with a hunting rifle and an unusual choice of blunt weapon on an admittedly intense finale. (All of this after treating us with a trippy scene where a stark-naked madman walks on fours while wearing a wolf pelt and howling. Yeah.)


While it's a fine addition to the continuously growing line of backwoods slasher titles, The Ranger (2018) honestly made any dents on the familiar formula of kids going to the woods and dying despite juggling its own brand of black humor, backwoods horror and hard punk. Perhaps not a bad thing for hardcore slasher fans, but for those hoping to see more, this is just a solid "okay".

Bodycount:
1 male body found rotting with a mangled face
1 female shot through the head with a shotgun
1 male gets an axe hacked up his throat, later found in half
1 male mauled offcamera by a wolf
2 victims found rotting inside cages
1 male found with a shotgun (flashback)
1 male found tied to a post and dead from gut wound
1 male repeatedly beaten with a pair of binoculars, pushed off a watch tower
Total: 9
Posted by Kaijinu at 11:21 PM