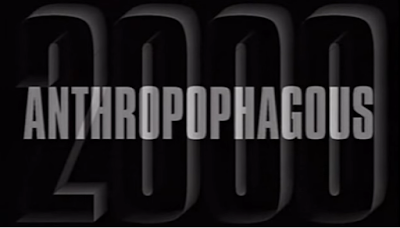 Ah yes, Andreas Schnaas. The director behind the shlocky yet kinda popular underground German horror film series Violent Shit, as well as many others including one of my guilty pleasures, Nikos The Impaler (2003). Many of us remember him for two things and two things only: fake looking yet shocking gore and fake looking yet shocking gore! This being mentioned, was it a bad idea to have him remake the 1980 Italian cult fave cannibal/monster/slasher hybrid film Anthropophagus by one Joe D'Amato, director of many Italian soft core smut and/or horror exploitation such as Death Smiles on a Murderer (1973), Beyond the Darkness (1979) and Ghosthouse (1988)?

Personally, seeing how the original Anthropophagus bored half of my mind into sleeping, not only would I say not really, but also please please please!

Anthropophagus 2000 starts with a trio of Interpol agents finding a cave littered with murder victims in varying states of decay. While two of the agents leave to call for back-up, one of them stays behind and finds a journal belonging to one Nikos Karamanlis, a wealthy man who got lost and stranded in the middle of the sea with his family after surviving a storm.

The story then shifts to what we can assume as both some time after the Karamanlis family got lost and some time before our Interpol agents found the cave; a couple is seen walking at a beach being lovey-dovey and (at least in my opinion) do the unsexiest hanky-panky inside their tent. Once they're done, the girl leaves to get some firewood only to return and find her man missing half of his face and a pair of arms grabbing her and a hatchet, hacking her dead.

In the meantime, the now-dead couple's friends, our main selection of meaty victims-to-be, are driving to a vacation home in Borgo San Lorenzo where they expect to meet and pick-up their assumed-to-be-alive buddies. Their ride is unfortunately cut short when their RV breaks down and one of them twists an ankle, forcing most of them to walk to a nearby village while some stays behind. Misfortunes continue when they discover the commune nearly devoid of living people and the deranged cannibal responsible has set his teeth and weapons to abduct and kill the new arrivals for food.

For most parts, Anthropophagus 2000 follows the plot of the Italian original with some level of accuracy, with only a few new twists and turns added in its attempts to update the story and make it fresh enough for modern audiences. Though some of these changes may have made the movie's low budget a tad more obvious such as exchanging an entire Greek island setting for a smaller set of abandoned backwoods ruins. it is a "downgrade" that I personally found nothing much to quarrel about, but will admit that it costs the film some of its creep and dread factor as an empty backwoods village doesn't have the same impact as an island community being nearly ravaged.

Further issues I have with the movie would be fact that it still retains some of the problems I had with the original Anthropophagus: much like that movie, this remake has its slow moments, most of it somewhere around the middle of the run wherein character, atmosphere and plot developments were attempted and genuinely failed due to how cardboard thin the casts were, how bone-dry the story is, and how many of the scares failed to be all that effective. These trappings didn't work then and they are definitely not working in this movie either. I will say, however, that low-budget quality of Anthropophagus 2000 made the lack of scares and story development kinda forgivable as it makes up for these loss with a little slice of cheese and a juicy rubbery splatter work that kinda made most of the trouble worth it.

The way I see it, Anthropophagus 2000's may flop as a serious horror flick, but it does succeed as a campy so-bad-it's-good gore film that only depraved gorehounds and open horror fans can enjoy. I love how the killcount is nearly doubled and how most of it guaranteed an outrageous death. Heck, a few of them even have a realistic flair to their execution despite the obvious latex prop use, one of which being an updated and slightly more upsetting take on the original Anthropophagus' most infamous cannibal scene, but a good chunk of the murders committed were so cartoonishly graphic that you just have to admire the lengths the movie went for just to reach that shock value. It's a shallow reason to enjoy a slasher flick, I know, but a little braindead fun will always have a time and place and I can see this film as an okay candidate whenever one is in the mood for a dumb horror film.

In the end, Anthropophagus 2000 didn't break any new grounds in terms of horror, not that it was really trying, but the underground filming quality somehow brought out the exploitation taste of the cannibal-cum-slasher plot quite well at a point, making this shlocky nightmare entertainingly bad and graphic that some of its many shortcomings can be forgiven. Watch on your own risk unless you have a taste for low-budget splatter flicks and German underground nastiness!

Bodycount:
1 girl hit on the head by a broken mast
1 male found with half of his face missing
1 female repeatedly hacked with a hatchet
1 male speared through the neck
1 male had his face bashed with a rock, disemboweled
1 male had his larynx pulled out from his mouth
1 female jumps to her death
1 male impaled on a stake
1 pregnant female knifed and cannibalized (flashback)
1 male ran through the head with a machete
1 pregnant female had her womb cut open with a rock
1 newborn cannibalized
1 female had her throat bitten open, back broken against the killer's knee
1 female had her head ripped off
1 male decapitated with a shovel
1 male had his head blown off with a gun
Total: 16
Posted by Kaijinu at 10:51 PM