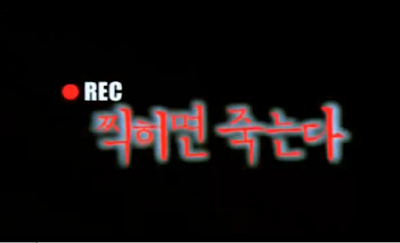 Tell me how often do you see this set-up? Some guy or gal gets tricked into going somewhere only to find out that it's a trap by a gang of haughty bullies and ends up maimed, deranged or, worst of it all, killed. And then, some time later, said bullies are getting their deadly desserts by someone who may or may not be directly connected to their little stunt. This is basically a classic set up for many slasher titles out there such as Terror Train (1980), Slaughter High (1986), I know What You Did Last Summer (1997) and Sorority Row (2009) and I guess it shouldn't come as a surprise that at least one or two foreign slashers out there would try to take a stab at this, such as this fairly odd yet passable Korean shlockfest. 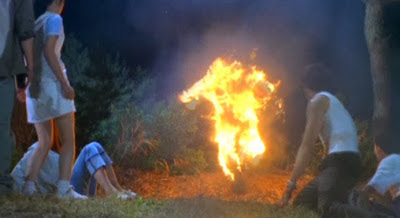 The Record follows a gang of students who, in an attempt to make a quick buck by filming and selling a fake snuff film, accidentally stab a nerdy classmate repeatedly for real when their prop knife malfunctions. Not wanting to take responsibility for their crime, they decided to burn the body away to cover their tracks, only to get the shock of their lives when the kid turns up still alive and was last seen falling off a cliff while ablaze.

Pledging never to tell another soul about what just happened, the group tries to live a normal life past the incident, dodging suspicions from concerned teachers and the boy's sister who starts to look for him. At the anniversary of the death, however, someone in an orange boiler suit and flu mask starts to stalk them, broadcast the accidental snuff they made, and eventually killing them one at a time. Could it be the gang's unintentional murder victim back from the dead to exact his vengeance? His suspicious sister, perhaps? Or one of the teachers? Whoever it is, it's only a matter of time and wit before a lot of these unpunished arses get what's coming to them.

Now, I often mention cheese as one of the factors I normally enjoy from the many movies I cover and the reason for that is sometimes a little neuron-dead stupidity can save an otherwise boring horror flick and turn it into an insanely hilarious campy entertainment. A few times it will work, a few times it'll make the movie worse, and The Record falls in between the two. 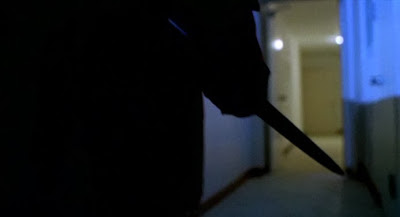 As seen from its opening sequence full of sexualized teenagers, unforgivable bullies and harsh teachers, Record has a vibe that's trying to be a school comedy full of bad decisions and unlikable bad characters which continues throughout the movie as our doomed thespians make one dumb choice to the next like, I dunno, roam around separately more than once without arming themselves first, or soak in a jacuzzi despite the knowledge that a hooded killer is hot on the trail? Despite this, the movie does try to be a serious slasher flick once in a while with a few workable grisly deaths among many and some twists and turns that caught me off guard, which all could have worked better given that the characters weren't as dumb as a deer's rotting carcass. The tone shifts too unpredictably due to this and I guess for some, this can work for the movie as it is attempting to break the norms, but for others, this can come out as annoying and a little too "bad" even for a bad slasher flick.

As mentioned, I find myself in the middle ground of hating and loving The Record; I love how easy going this movie is, delivering some okay pieces of trashy entertainment with an Asian flair and a decent looking production value for its time, but it may have done the simplistic plot and dumb-as-door nail characters a tad too much that I can't bring myself to think anymore of this movie other than a forgettably basic teen slasher cash-in. There are definitely more better titles from Korea to choose from, a lot of which actually having some sense of story and/or delivering more buckets worth of blood compared to this film, but if you want to keep it quick and easy then who are we to stop you from checking The Record?