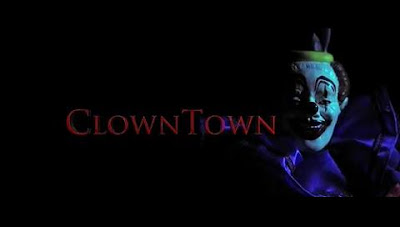 So we have teens, an abandoned town and a group of killer clowns. Nothing else. Nothing much.

ClownTown is technically something I can enjoy in a braindead manner as its story is your basic slasher high jinks with people in their 20s teenagers driving to a concert only to end up going to a nearly abandoned town overrun by killer clowns instead. Kids run. Clowns give chase. Death happens to both sides and then some. It couldn't get any more standard than that.

While the lack of originality didn't bother me much (I snickered a bit at the obvious John Carpenter Halloween tribute of an opening act. Plus there is the obvious undeniable fact that there is already a lot of killer clown horror movies with varying effectiveness), the final product still has some noticeable issues, most distracting of them coming from a number of plot holes that led to some ideas that are a little too cheesed-up to the point that it left me chuckling at its sheer stupidity and/or inconceivability.

Would you really go all the way to an abandoned town and wait until nightfall just to get a phone back, for example? I know in today's day and age, a phone is pretty important, but all that patience and dedication to a small piece of machine is just barely believable even for a horror flick. Still, if it leads to killer clowns cornering these dumb butts and killing them, then I guess some positives can be considered.

And speaking of clowns, why exactly are the killers dressed up like that? We did get a bit of flashback/twist reveal combo some time later in the movie that sort of explains why, but it only covers two of the killers. What about the two to three other killer clowns prowling? Clown fetish? Clown cult? While one may argue this is a way to keep the killers mysterious and I could try looking at it in that mind set, the story was already willing to give us some backdrop on the killers, that they have been popping in and out bumping off people dead when the now abandoned town wasn't so, well, abandoned, so they might as well give us something about their costumes, right? But the movie didn't, leaving most of these bozos quite forgettable as villains (save for two: a pantomime-like gentleman who kills with a crowbar, and one that looks like what Three Finger from the Wrong Turn movies would look like as an evil clown) and yet it did little to affect the main point of the story (killers hunting down teens for the sake of hunting) so I guess we're supposed to leave it at that.

The murders are arguably basic for a slasher film. It could have been worse, yeah, but it could have been better as well should it have used its creepy and sullen tone a tad better, offering only a few jump scares with the killings to, I bet, have them do more than just blood spilling from gashes and knife cuts. Noble efforts despite being, much like the majority of the villains themselves, forgettable.

Again, I really have little else to say about ClownTown. It is what it is and it's not something I would really think anybody will lose sleep over now that I've seen it (and that is saying a lot seeing I am a huge fan of good killer clown slashers) but if you happen to be a slasher completist and/or a killer clown fanatic like me, I say give it a rent.