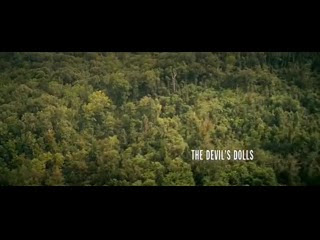 When a horror movie killer dies within the first ten minutes or so of the film, you know darn well that something else is up.

On one fateful day, detective Matt finally caught and kills backwaters serial killer Henry Leonard Bale, apparently ending the maniac's streak of brutal slayings and closing the very case that ruined his marriage. But when a series of savage killings begins plaguing Matt's small town, one of the perpetrators being his own young daughter, it suddenly becomes clear that the threat is far from over and he will soon learn something new about Bale. Something formerly hidden away from a wooden box, never meant to be taken out...

Looking past the brutality of its murder sequences and the interesting variation of a should-be enlightening child's trinket, The Devil's Dolls (or Worry Dolls, a cooler less-generic title I actually prefer) could have been a gorily intriguing thriller in the vein of other voodoo horror flicks like The Serpent and The Rainbow or the underrated The Skeleton Key (2005), but it instead passes through its run time as a somewhat predictable bodycounter, bringing out the worst and the passable slasher flick tropes.

Falling in right between terribly executed and the agreeably entertaining, Dolls noticeably suffers with a lot of plot holes, some caused by questionable writing (if Matt have been on Bale's case so much so to the point he practically ruined his marriage, then shouldn't he at least knew about Bale's past as a practitioner of voodoo magic?), others by the folks at the cutting room. (we never really saw the part Matt's daughter, Chloe, took the dolls. One minute they were in the car (as supposed to, y'know, put them in an evidence locker or something), then the scene shifts and Chloe's making necklaces out of them at some shop all of the sudden) It also doesn't help that not a lot of the characters offered to us were that well fleshed-out, affecting a would-be workable concept that the titular dolls apparently amplify whatever anxieties its wearers go through to the point of being deranged and homicidal. If we did get to know these characters a tad better, I'm sure the brutal lashings and slashings they do once the dolls force them to go nutty cuckoo would have made a stronger impact both gore-wise and story-wise, but instead they simply let the movie as basic as possible, which in turn may just be enough for the right audience.

As The Devil's Dolls decided to simply have our protagonist just go about and try to figure out why these seemingly innocent people suddenly go Jason Voorhees on everyone (Something we, the audience, already know and probably waiting patiently just for them to wise up), it's direction thankfully breezes through the Southern Gothic sensibilities of voodoo and a few shredding of B-grade police drama in a quick enough pacing, and we are often rewarded with some strong slasher-esque scenes, the best among being the opening action wherein we see just how dangerous Bale was alive and wielding a gas-operated powerdrill (how else are we to explain the chainsaw sounds that thing was making), and one The Burning-inspired situation wherein a husband goes on a garden shear stabbing spree.

The blood and gore effects from these scenes are generously gratuitous, but I am a tad underwhelmed with the kind of climax they decided to do once the dolls were collected. Without giving away much, it was like the film had a problem of not having a central villain to focus with so they decided to throw in a last minute twist and, well, it just felt rushed, unnecessary and out of character. I guess the lack of villains to fight at the end would have made the resolution quite too easy, but I just felt like they could have done a better job with it, especially since the absence of a central killer is one of the key points that made Dolls such a fun film.

As a whole, The Devil's Dolls is just a B-flick being a B-flick, despite the lush camera quality and too good special effects used. It's not gonna be something we could lose some sleep over but whenever it is available for a quick viewing, I would recommend giving it a shot should you be thirsty for an easy story and blood red killings!