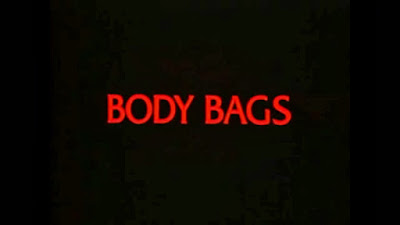 My time with the horror anthology TV movie Body Bags goes a long way back, closely around my preteen childhood when Philippines was still getting used to the idea of cable networking and I was one of the lucky kinders to experience it first hand. I remember seeing Bags one morning during a Summer vacation and I thought it was pretty gnarly with all the messed-up deaths and body horror. Saw it again a few years later at high school, and then again when I was at college (the latter being my "resurgence" to slasher flicks) and until this very day, I still think it's an okay movie, but I just can't help but feel the John Carpenter directed segment The Gas Station is out of place.

The short takes place at the titular gas station in Haddonfield, Illinois (yes, Micheal Myer's Haddonfield) where one college student named Anne will be working her first night at as an attendant. It should have been a quite evening if it wasn't for the recent news of an escaped mental patient killing people and Anne begins to suspect maybe the vagrant she lately encountered might be the killer. Little does she know, unfortunately, the nutcase is much closer than she anticipated.

As a segment to the entirety of Body Bags, The Gas Station just felt lost; while the next two segments, "Hair" and "Eye" deals with body modifications as one man gets a hair transplant he will never forget and another poor soul gets a literal evil eye respectively, Station functions no more and less than a standard fare slasher flick. It's a tad distracting as another body modification segment would have made Bags a thematically balanced body horror anthology, or at least have one of said body horror shorts replaced with something entirely different should they wanted to keep things as colorful as possible.

Thankfully, Carpenter managed to make an inspired bodycounter out of The Gas Station as it can stand and exists on its own, devilishly playing with a decent twist and a generous offering of bright red goriness. With a strong resemblance to a fun campfire tale or urban legend, the direction and build up to the big reveal came with a lot of strong atmosphere and some likable bunch of players, most of whom made up equally fun cameos including directors Wes Craven and Sam Raimi, David Naughton from An American Werewolf in London, and They Live (1988) and Arachnophobia's (1990) Peter Jason. Once the big twist was made, the short even held nothing back on the stalk-and-chase antics, as well as on a last minute blood work, making Station a really strong first segment and undoubtedly the best among the three. (Or four if you're the kind to include the wraparounds)

Bloodily exciting and effectively creepy, The Gas Station is, no argument, a really good slasher short and personally one of Carpenter's stronger offering to the horror crowd. May it come packaged with two body mod fright flicks or simply on its own, make no mistake on dismissing, or simply missing out on this segment as a true bodycounter!