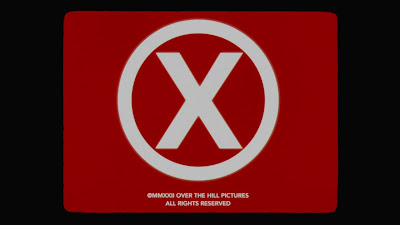 X (2022)
Rating: ****
Starring: Mia Goth, Jenna Ortega and Brittany Snow
After his effectively depressing and intense religious cult, found footage horror The Sacrament (2013), it has been a while since we saw director Ti West step foot into horror again, ain't it? Well, boys and girls, the man has returned with something a little spicy, creepy and all around messy. A certified rated X. 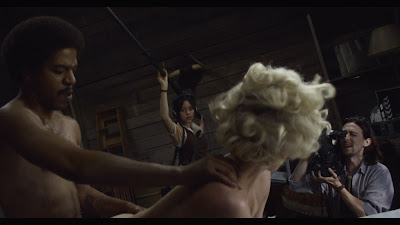 Set in 1979, a small film crew plans to secretly shoot a shoestring budget adult movie at a rented farmhouse all the way down at countryside Texas, hoping to cash in to the rising popularity of home video markets. When the gang arrives, the farm's married elderly owners are more or less capricious towards the group, either hating and envying their unruly youthfulness or low-key stalking them out of creepy leering interest. As problems arise between the film crew regarding the mediocre content of their film and some of them willing to shed their modesty to join in the smut fun on-camera, little do they know that by nightfall, these will be the least of their worries when someone's sexual repression and mental stability breaks into a murderous madness and they're making sure no one from that farmhouse will get out alive.
Raunchy, gory and occasionally uncomfortable, X (2022) presents itself as an exploitative and gritty throwback to vintage grindhouse cinema, blending the simplistic carnage of bodycount horror (mainly of Tobe Hooper's works ala Texas Chainsaw Massacre (1974)) with the sentimentally haunting creepiness of hagsploitation films and the fearless, rebellious raciness of 70s porn flicks. 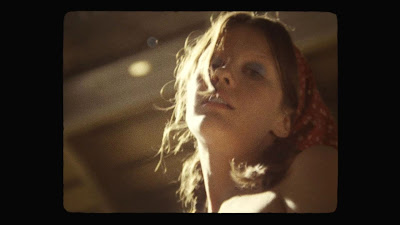 Though the plot is pretty straightforward (as in its the typical group-goes-to-place-only-to-be-hacked-down-to-pieces-by-killer jig), its slowburn stroll towards the premise's characters and underlying themes of coveted youthfulness patiently covered enough depth behind the smut and savagery that the resulting murders and the handful of nightmare imagery earn their striking shock value; we get to see sides from both the protagonists and their antagonistic counterparts that aren't typically explored from a paint-by-number slasher film, in which X (2022) both breaks and plays the norms around horror character tropes and gives us a slightly inventive reworking of what we normally expect from these types of casts in turn. 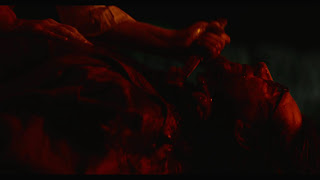 For one, the clichéd "sex means death" story element reeks high among our casts of smut enthusiasts as their pornographic debauchery fuels our antagonists with murderous rage, seeing the exploits as a mockery to their religious lifestyle, yet the writing in the story's slower moments fleshed out a little more from our doomed film makers, hinting lives they wanted to escape and opportunities they're intrigued by despite their couth nature and skepticisms which paints sex on a more positive outlook, rather than condemning it. The same can be said to our killers who we could've easily classify under the typical "fire and brimstone" psychos blaring 24/7 religious TV propaganda; they degrade their guests as whores and degenerates on one end, however the film made it clear that their hate stems from the fact that they miss their own opportunities to be carefree and hedonistic, their own carnal desires now out of reach due to their age and a strict Christian upbringing. It's a warped concept of oppressive religious ideology that isn't exactly new, though welcomed here for how it's applied. 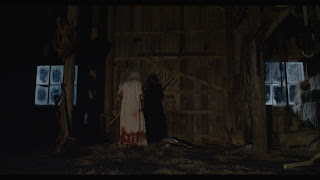 For a relatively small casts, every member pretty much nailed their roles and kept everything their characters do in tone to the movie's flow and atmosphere, especially Mia Goth who showed a range of talent by donning two contrasting lead roles: as the headstrong yet vulnerable aspiring actress Maxine Minx who appears to be drowning her past with sex, drugs and a dream in showbiz, and as Pearl, a sexually frustrated hagsploitation biddy, wielding a knife or a pitchfork on one hand and a caressing, yearning touch on the other. In regards to the slasher goods, a serviceable deal of the kills are gruesomely gory and those that aren't make up for it with imagery and tension, one of which even standing out as a nod-and-wink tribute to Hooper's Eaten Alive (1976). Cinematographer Eliot Rockett films amplifies the deaths and creepiness with stylized angles and lighting, elevating simple scares and murders with a bit more flair, and the make-up and effects done by Netherlands-based MimicFX Studio among many others just add that extra horridly squeamish touch that keeps a slasher flick exciting! The score done is also hauntingly fitting, managing to turn orgasmic moans and angelic hums into a foreboding suite of dangers to come.
X (2022) is certainly more on the patient side given its pace on plotting, but one cannot argue with the resulting carnage and grue once shit really hits the fan, as well as the intriguing themes and character dynamics we get along the way. At that, I can honestly say this is one of Ti West's stronger movies and one of the best slashers to come out in modern horror! And with its prequel Pearl to be released soon, you can bet your sweet Johnson I'll be keeping an eye out for it!
Bodycount:
1 male knifed in the neck, stabbed to death
1 male stabbed in the eyes with a pitchfork
1 male body found rotting in a basement
1 male shot on the chest with a shotgun
1 female eaten by an alligator
1 female shot on the face with a shotgun
1 male suffers a heart seizure
1 female had her head ran over with a van
Total: 8
Posted by Kaijinu at 11:32 AM