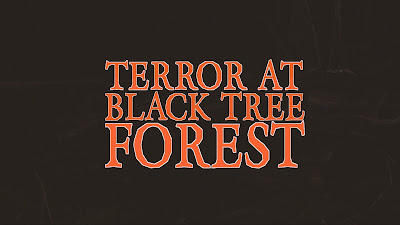 I heard about Terror At Black Tree Forest (2010) all the way back around my college years through the website Retroslashers when it was still running. It's a supposed throwback to backwoods stalk-and-stab types featuring bag-headed killers and, at least from what I read, it's awfully mediocre. Yet, here I am finding out not only did this film somehow got sequels, but it also have a 2021 United Kingdom remake! Well, as of writing this, I've yet to see the first three original Black Tree Forest movies but, after seeing this cinematic disaster, I'm not too keen on seeing any them if the whole thing is going to be THIS bad! 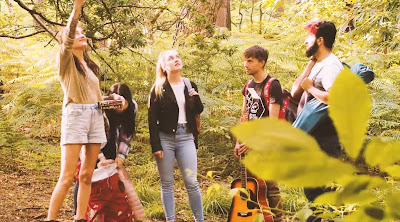 The film opens with a couple looking over a lake, reminiscing about their first meeting and first kiss with some confusion from the two as they remember everything differently. They soon head back to camp, got lost in the woods until dusk and find themselves on the murderous side of a shmuck in a sack mask.

Come the day after and we now follow a group consisting of a Caroline Travers, stoner Molly Wade, goofball dudes Simon St John and Will Andrews, and Jane Mellows, the newest addition to their little pack. They do the usual kids-go-to-the-woods jig of setting up camp, joking around, exploring the surrounding forest, get creeped on by mysterious figures in the background and (wouldn't be a slasher flick without this) telling ghost stories around a campfire. 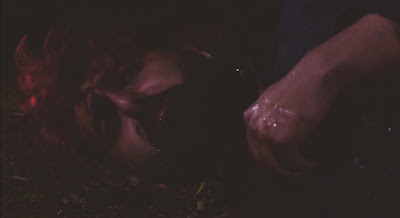 As the night goes on, our bag-headed killer eventually starts a good run of killing these people one by one, as these films normally do. Now, see, I wouldn't have any problems with this paint-by-numbers stalk-and-stab approach given that everything else about this film wouldn't be so problematic, but Terror of Black Tree Forest (2021) just have to line itself up a whole load of dumbfuckery; first of which, these are probably the most densely annoying cast of characters I have to sit through as once their numbers start dwindling down, we have one or two of these dumbasses refusing to believe that something is wrong and that all the splattered blood and screaming happening around them are just a part of a prank. Yeah, sure, I would get it if one would see it that way with the first sign of danger, but the writing and direction really milked this plot point. Like really, really milked it, to the matter that most of the dialogue around the third act is just a roundabout of "This joke isn't funny anymore" before someone fires back "It's not a prank" and then gets a response of something like "Yeah, sure".
I bet if I smash one of these guys' face in with a sledgehammer, another would berate me and my victim about our poor taste of a prank and nags the twitching corpse next to me to stop acting and get up. Oh, wait, you know what? That did happen in the film: one guy gets a fucking knife ran through his head, two girls run off, only to stop and have an argument with one another at how this is the worst practical joke they ever experienced. Hell, the dumbfuck even walks over to the killer after spotting them, thinking the figure who just knifed a guy's eye out is in on the joke. You can guess what happens after that smart move. The fucking idiot... 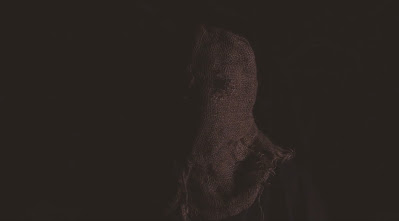 With this level of writing in mind, the direction and pacing can sum up as tedious, and the scares and suspense are very lacking. Any slice of gore here do look impressive for a small budget production, but when most of the victims are as dumb as someone walking into a bonfire to dry up after swimming in a lake full of gasoline, it kinda takes away the thrill of the blood spill. Add on the killer's motive being shallow at its worst and comparable to a teenager looking for attention so, yes, this movie just keeps getting suckier until the last minute.
What else is there to say but Terror At Black tree Forest (2021) is just embarrassingly awful, infuriating even, and that I'm highly hoping that the entire franchise isn't around this level of bad.
Dear God, please, don't let them be this bad...
Bodycount:
1 male knifed to death
1 female strangled with fairy lights
1 male knifed through the throat
1 male knifed through the head, exits out of an eye
1 female gets a knife thrown to her chest
1 male found dead with a throat cut
1 female stabbed in the gut with a knife
Total: 7
Posted by Kaijinu at 2:48 PM