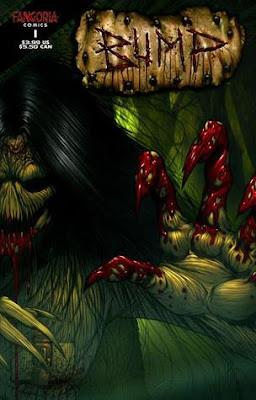 Long ago -about a decade or so- after American horror magazine company Fangoria ventured over into producing films, sponsoring conventions and running online TV and radio shows, they decided to branch out to another form of print media and out came Fangoria Comics with two of its first titles debuting in 2007. These were Beneath the Valley of The Rage, a prequel comic to a low budget 2007 zombie movie called The Rage, and the topic of today's discussion, BUMP.

Penned and drawn by Mark Kidwell of Image Comic's zombie series "'68", BUMP follows a dark-and-stormy-night situation where a family of three and a trio of teenagers get stranded in the middle of a backwoods road after a thunderstruck tree causes an accident. Looking for shelter, the six finds a nearby farmhouse occupied by a frail old lady, not knowing this is the infamous Old Dill Farmhouse where, back about 30 years ago, a serial killer named Edgar "Eddie" Dill did his gruesome deeds and was the last place he was ever seen alive at. That night, however, with new fresh victims to slaughter, Eddie returns from the grave and whatever carnage he has planned for these people, he's not doing it alone... 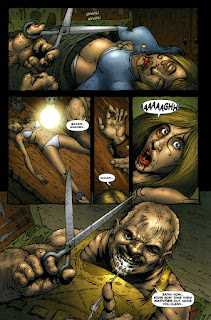 A mishmash of backwoods slasher roots ala Texas Chainsaw Massacre (1974) and violent supernatural cabin-of-horrors jigs reminiscent of The Evil Dead (1981), BUMP hails a decent concept for both a new slasher and breed of ravenous creatures, but not enough of a concrete story to make more of these beasts other than the big lug has a crusade against dirty girls and that the monsters like to rend and bite. With only four issues to run the story, I'm not really that surprised that this limited series felt like a low-budget B-flick filled with predictable tropes and momentary slow bits to loom around the more otherworldly aspects of the plot, though considering that the story does toy around with the idea of building its characters and the mythos surrounding Eddie and his army, I expected some substantial lore and world building would be at least introduced and followed through. 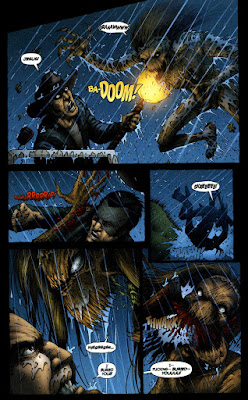 Truth be told, BUMP instead preferred to keep things mostly in the dark and just get into the meat of the horror as much as possible, may it be a mad slasher with a speech impediment impaling people with carving tools or wooden "Treehuggers" clawing and tearing flesh apart. It delivers on the gory art and monster violence masterfully enough through expressive character designs (Well, somewhat expressive. Half of them often drawn looking dazed for some reason...) and detailed horror sequences but, again, I really believe that the short issue run was what chipped and dented this mini-series down into a standardized but still readable horror comic when it seriously could have been better. Heck, the story doesn't even have a satisfying finale as just when you thought the plot will lead to an interesting reveal or a climatic brawl, Eddie simply stabs and hexes his way into winning at the end so abruptly, it led to a rather unearned cliffhanger that just felt lazy.

I'd heard through the grapevine that (apart that there's a failed plan on adapting this into big screen. Starring SAW series' Tobin Bell of all people) Kidwell did expanded BUMP's story through his own novelization and I do hope I will get my hands on a copy one day. Again, the story has potential to be a fun B-Grade horror piece that I'm earnest will be more enjoyable if its flaws were fixed so here's hoping that the book will be (hopefully is) an improvement. Until then, this is a comic that I could love for its simple entertainment but ironically hate for its shortcuts and wasted opportunities. Nuff' said.