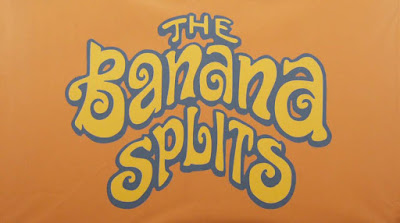 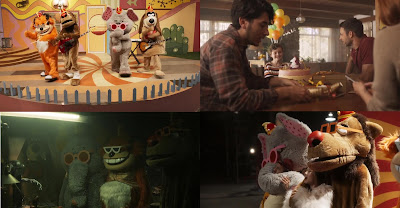 Well, just when I thought slasher cinema couldn't get any weirder, here we have an officially licensed horror movie about mascot characters from an obscure 60s variety program created by Hanna-Barbera (as in Yogi Bear, The Flintstones, Scooby-Doo Hanna-Barbera) as murderous robots. Considering we got Harvey Birdman: Attorney at Law out there, I guess it shouldn't come as a surprise we're going Chopping Mall (1986) with The Banana Splits!

Set in a universe where The Banana Splits show is still on-going and well loved by many kids, young superfan Harley gets the chance to see a live recording of the program when his parents Beth and Mitch got tickets for five for his birthday. Tagging along Harley's sweet 19-year old brother Austin and a classmate named Zoey, the family soon drives to the Split's studio, unbeknownst to them that this is actually the last taping they're attending following the show's unexpected cancellation.

Unfortunately for all of those involved in the show, as well as Harley's family and pretty much the rest of the audience, the Splits aren't too happy with the cancellation and they decided to do everything they can to make sure the show must go on, including killing a few bad eggs and the occasional bystanders. And to make matters worse, these aren't just people in funny animal suits, they're animatronics. Walking, talking, life-sized, steel-strong and hardwired animatronics.

With an impassive yet silly approach on the subject, The Banana Splits Movie (2019) stands out as an odd ball of cheese and mire reminding us why mascot characters can be so darn creepy and what kind of horror show awaits us in the bizarre situation of them being Terminator-esque robots underneath all of them fluff and felt, all the while injecting family melodrama and themes concerning maturity for that little shred of character development that thankfully didn't get too hammy. 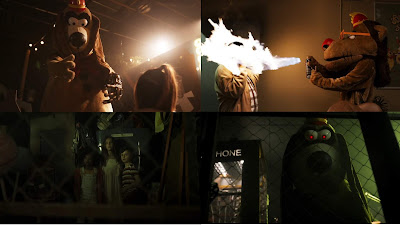 Structurally, The Banana Splits Movie (2019) is thin in story and formulaic at times, finding one reason to the next to split up our casts in a nearly-abandoned filming studio, just to dish out overly gory and torturous kills to the expected obnoxious types from cheating husbands and drunken actors to pushy stage dads and annoying men-children. Nevertheless, the overall direction, pace and atmosphere of the movie makes up for the plot holes and cliches, choosing to ignore vital story points like why exactly are the Splits robots or why nobody seems to deeply question this, for the sake of diving the movie down to pure exploitation territory rich with black humor, twisted grit and delicious practical gore that is begging to suspend disbelief and just be ridiculously dark. Thus, it doesn't feel overly serious despite the straight-faced acting and muted backdrops, nor are we to expect it will give the time of day to broaden its characters to more than two dimensions, so we more or less have a malarkey plot of killer robot mascots here and so long as they're braining people with hammers or setting them on fire, I'm quite fine with that. 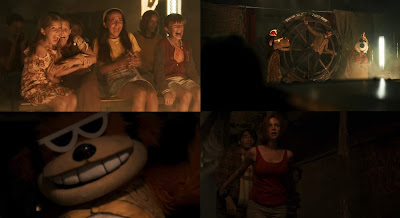 Concept-wise, the film isn't overly scary but it does have its unsettling and distressing moments (them kids are gonna need years of therapy) and a fun set of fluffy villains that succeeds on being maliciously creepy. It is an overall fun B-grade slasher romp that utilizes its own absurdity, subverting childhood nostalgia into something sinister to great effect which we slasher fans can warmly welcome from a bonafide guilty pleasure! What else is there to say but The Banana Splits Movie (2019) is making up a mess of fun and it's bloody fun for (probably, mostly) everyone!

Bodycount:
1 male gets a prop lollipop shoved down his throat, crushing it apart
1 male chopped in half with a prop saw
1 male found beheaded
1 male had his back stabbed and pried open with a prop key
1 female bashed on the face with a mallet
1 male slashed with a metal claw
1 male found stabbed in the eyes with drumsticks
A number of victims found murdered and hoarded into a pile
1 male had his limbs torn off
1 male ran over with a buggy
Total: 9+
Posted by Kaijinu at 3:13 PM