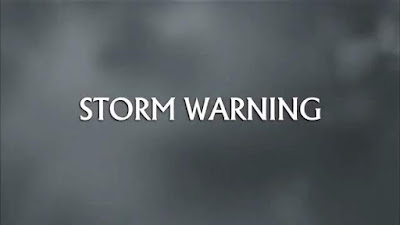 If there's anything I've learned from watching slasher movies is that nothing good ever comes to foreign vacationers once they end up lost and their only place to crash in for the night happens to be a shoddy shack populated by equally shoddy bumpkins. Further to rest my case? This "Ozploitation Hicksploitation" throwback directed by none other than Jamie Blanks of slasher cult favorites Urban Legend (1998) and Valentine (2001).

For their romantic getaway, well-off married couple Rob (Robert Taylor) and Pia (Nadia Farés) has a simple plan in mind; take a sailboat out to the Australian coast, soak up some sunshine and probably catch a fish or two. What they didn't count on happening is a sudden storm brewing and Rob's terrible navigation skills getting them both lost as he tries to get back to shore.

It isn't long before the two find themselves sailing to a marshy island where, unfortunately, worse trouble awaits them as a family of three hardened hicks (played by David Lyons, Mathew Wilkinson and John Brumpton) happens to be living there, illegally raising marijuana and not too hesitant to go violent to whoever crosses them wrong, this including lost couples who stumble upon their house. With a storm raging outside and a clan of criminals threatening them with castrations, rape and death, Rob and Pia will soon find themselves pushed to their breaking points and have no choice but to fight and kill in order to survive an their harrowing situation.

Practically, Storm Warning (2007) is a decently shot and budgeted production that doesn't offer anything new in the market with its thin story echoing the likes of Last House on The Left (1972) and Wolf Creek (2005) wherein normal folks go toe-to-toe against murderous criminals in a long night to survive. It suffers a bit from having protagonists that embody the dumb side of yuppie culture for their lackluster decision making (to build up the plot, probably) and one of them wussing out a lot, but the acting from its relatively small casts warrants some good praises, especially towards the redneck characters that most may agree as one of the best parts of this film. The direction also goes into turfs not usually taken when it comes to these kinds of films as their leads normally would go through extreme torment before having them lash out against the villains, but Storm Warning (2007) kept it subtle on the onscreen violence and played more on emotionally and psychologically tormenting our unlucky couple, something that definitely works well to how near-realistic the despicable marshland goons were portrayed.

If you're patient enough to stride across these familiar waters, then I'm glad to say past the by-the-numbers hicksploitation is a highly energetic and unexpectedly gory climax that made the most out of the small kill count. Bad CG animation does get into the fray (a part of it used to create the storm clouds as Australia was going through some serious drought during the movie's filming), but they're mercifully few and bulks of the gore effects were done practically. Dog maulings, groin mutilations and wobbly-eyed hammer victims are just some of the nasty surprises Storm Warning (2007) cooked up once the survivors go hands-on offensive, bringing forth one resourceful final girl and a killer stalk-and-chase last act with a badass country rock score. 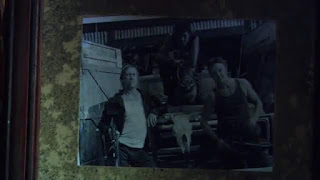 At the get-go, Storm Warning (2007) undoubtedly looks something most of us have seen before in one form or another and in all truthfulness it may as well be, but its directness gave us a fun romp of classic backwoods horror around rural Aussie wetlands. It boasts enough direction and menace in its simple plot with a satisfyingly intense and bloody finale to boot, this one is a real underrated work that I definitely recommend for grindhouse horror fans and good lil' curious cats out there.

Bodycount:
1 joey decapitated with a butcher knife
1 male found murdered
1 male has his face snared and mutilated by a hooked fishing line trap, brained to death with a hammer
1 male mauled on the groin by a dog, disemboweled
1 male bumped unto an airboat's propeller, top half shredded
Total: 5
Posted by Kaijinu at 11:03 PM