An Old School Detention Massacre: Into The Dark: School Spirit (2019) 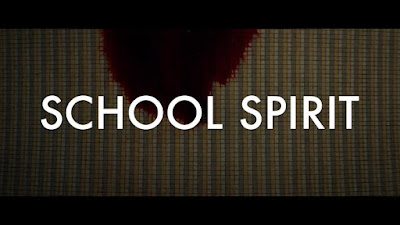 A joint effort between horror movie company Blumhouse's television branch and video-on-demand subscription service Hulu, Into The Dark is a monthly horror anthology web series where each episode is a feature length film inspired by a holiday from the month it is released. For August, they tackle on the first day of school and they're doing it with a back-to-basics slasher approach. And a bit of Breakfast Club (1985).

Taking place in Helbrook High, star student Erica Yang (Annie Q) finds herself attending weekend detention for reasons she's secretive about, much to the slight amusement of some of the school's delinquents who she'll be attending with. Chores are soon given under their vice principal's orders (who's clearly less than happy to be wasting a weekend babysitting hooligans) though it isn't that long before the more hardened members of the group decide to just goof around, welcoming Erica and another non-detention type in their circle with booze and buzz as their vice principal just sulks away in his office, numbing the pain of a recent divorce with a bottle of whiskey.

It's around here that we get to know about the school's own urban legend "The School Spirit", who is said to be a former elderly teacher who got killed by a prank gone wrong, her body dressed up as the school's Admiral mascot in a sad attempt to hide the crime before it's eventually found out. Now they say she roams the halls as a ghoulish revenant, stalking and murdering those she sees as "bad kids", so should we all be surprised when our gang of goofs starts getting sliced and diced under the School Spirit's sword?

While Into The Dark have good runs with entries like the psychologically creepy Pooka! (2018) and the thought-provoking Culture Shock (2019), it isn't without its lackluster episodes like most horror anthology series and School Spirit (2019) is concretely one of its more standard titles. It's a by-the-numbers slasher flick through and through, paper thin in plot and often predictable in its direction, something that usually doesn't spell a bad movie for this sub-genre but Spirit undoubtedly felt basic.

Affairs are at least kept passable and engaging due to a solid cast so the character interactions are watchable for their worth, a saving grace seeing half of the movie's total run appears to center on building its small casts and even succeeds on making me root a few of them to survive. Cinematography mainly consisting of static shots and empty framing is also used to a decent effect on some of the film's scare scenes wherein our killer prowls empty biology labs and hallways, though the rest of School Spirit (2019)'s slasher horror elements were decided to be played safe, shying the camera away from anything extreme and leaving us with two to three "daring" murders (one of which involves a guillotine trimmer) shown mostly onscreen out of the double figure kill count.

The mystery behind the identity of the killer is also disappointingly easy (A trick to make us consider that the killer might be supernatural? Don't bring it up every ten minutes in your story! Makes it an obvious red herring), plus it doesn't help that the character behind the slayings gets defeated in the most embarrassingly naive way. Thankfully, overlooking the monologuing creep that is our unmasked killer, the film’s final act earns back a degree of workable fun for approaching it as a hammy mash-up of Happy Birthday to Me (1981) and Psycho (1960), ending with a satisfying second reveal behind Erica’s detention and giving us a dark turn for our final girl.

School Spirit (2019) by some parts is inert, though not completely unwatchable. It's familiar stance and stride through slasher tropes lets you know you could be watching a better campus set dead teenager flick, but if you're in the mood for a simple, harmless and easy-to-swallow teen horror flick to pass the time then you could probably work something out with this one.

Bodycount:
1 male found stabbed in the eye with a screwdriver
1 male slashed with a sword
1 elderly female seen dead from a heart attack (flashback)
1 male had his head chopped off with a guillotine paper trimmer
1 male had his feet sliced off with a sword, killed
1 male killed offscreen with an axe
1 female hacked on the head with an axe
1 male and 1 female seen killed
1 male skeleton seen
1 male seen stabbed to death
1 male ran through with a sword
Total: 12
Posted by Kaijinu at 8:48 PM