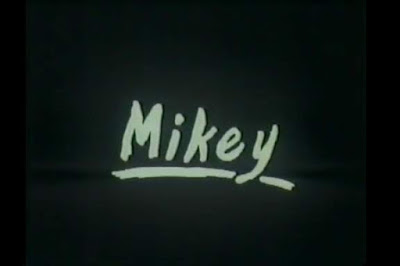 I first came upon Mikey (1992) as a DVD at the video section of a local mall when I was a wee little lad going through a zombie phase -as in I watch and re-watch zombie movies both old and new as if its a daily nutrient vital to my very existence- so I didn't really give much thought about it other than I find it silly that they try roping in classic slasher villains Freddy Krueger and Jason Voorhees as if the little evil twerp in the cover would match up to their legacy. Yep, lil' me isn't easily persuaded. (Most of the time)

I eventually got to see this movie some years later when I'm at college, spotting a copy at a "get-three-for-one-price" bargain sale that also led me to owning a copy of Death to The Supermodels (2005) and Sparrow (2010). Let's just say the following weekend took a toll on my brain cells...

The gist of Mikey (1992) is that the titular boy is a 9-year old psychopath with a murderous streak; we basically start off the movie with him killing his adopted mum and sister after the former scolds him for playing with fire and the latter for not taking in the blame. One deep fried mum and (a disturbing sight) drowned girl later, Mikey's adopted dad gets home from work and the little bugger brained him to death with a baseball bat before hiding in a closet and spinning a tale about a murderous break-in when the cops find him.

This puts Mikey unto another foster home and taking him in are Neil and Rachel Trenton who are quick to treat the kid with much love and dedication as a happy family would, introducing him to a neighboring kid to befriend, taking him to zoos and setting him up to a good school. For a good while, Mikey behaved like a little angel while occasionally slipping out weirdness like lying on graves and drawing murderous turkeys that most quickly concludes as his trauma acting up. It isn't long before the boy's goody-goody facade starts to slip and Mikey's back to the evil kid shtick, sabotaging dates involving a teen girl he grew a liking to, manipulating adults into thinking he's innocent, and straight up murdering folks that he doesn't fancy anymore.

Quite surprised to see a lot of familiar faces in this one like Hellraiser's Ashley Laurence as Ms. Gilder and A Nightmare on Elm Street 5: Dream Child (1989)'s Whit Herford as Mikey's friend Ben, though I doubt their presence in this film will be enough to make it a gem well-worth finding. For one, while Laurence does a fine job as a kind teacher who's the first to see past our killer kid's good guy persona and Josie Bissett of the TV series Melrose Place fair quite well as the object of Mikey's puppy dog obsession affection, the rest of the casts have acting chops that remind me of tongue-in-cheek made-for-TV dramas of the old days that oddly goes well with the absurdity of Brian Bonsall's serial killing child character Mikey whose cheesiness reeks strongly from cringy one-liners and crazy feats the movie have him do. (Like prop up three adult corpses into a macabre dinner set-up for the film's finale. Then again, it's like hours after he killed said three adults so...)

This might fair well for those looking for a silly killer kid horror movie to poke fun at, but those looking for a dark and serious thriller regarding mentally damaged children probably wouldn't find much here to satisfy their viewing needs no matter how much the movie tries to build a sensible build-up to Mikey's climactic murder-outburst, a direction that leaves a huge bulk of so-so nuclear family deconstruction and predictable plot development before the movie gets back into bodycounting. On that note, not much to say about the kills regarding bloodiness or gore (with two of them pretty much a carbon copy of one another), but the first massacre certainly has its dark moments (again, drowned child) and we did get a few passable latter kills including a fatal slingshot and an arrow through the gut.

As an interesting footnote, Mikey (1992) is one of a few films still banned in the UK, originally rejected in 1993 before finally getting the ban in 1996 due to the case of young James Bulger, who was kidnapped and murdered by two ten-year-old boys. Child psychiatrists and other professionals probably had a field day pointing out the dangers of exposing lil' minchkins to slasher films like Mikey (1992) much to the delight of witch hunter soccer moms, thus it simply never got resubmitted for release since then.

Truth be told, the idea of a murdering child is upsetting and terrifying in general, but this film's generic slasher framework and hammy cliches do drop the terror factor of the concept a notch or two, despite the occasional creepy imagery. (Mikey videotaping and re-watching his own murders, for one) It's far from a forgotten classic, but it executed the tropes well enough to at least earn a fleeting interest and a sporadic watch.

Bodycount:
1 girl drowned in a pool
1 female electrocuted in a bathtub with a live hairdryer
1 male crashes through door glass, brained to death with a baseball bat
1 male electrocuted in a Jacuzzi with a live radio
1 female stabbed on the neck with a glass shard, falls off a floor
1 male shot through with an arrow
1 female shot on the eye with a slingshot marble
1 male immolated in house explosion
Total: 8
Posted by Kaijinu at 1:57 PM