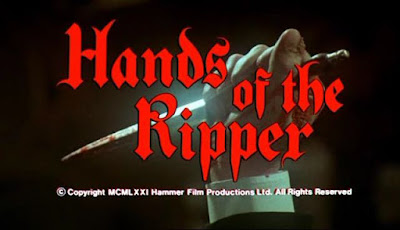 Lo and behold, the very movie that took my Hammer Films virginity!

A period horror flick set in the old Victorian times, we start off with none other than Jack the Ripper, chased by an angry mob wielding pitchforks and torches, giving his pursuers a slip by hiding inside a house after outrunning them. The home's occupants, in an early twist, turns out to be his own family, with his wife worriedly telling him that ole' ripper strikes again. She, however, soon puts two and two together when she finds her husband's hands covered in blood and sadly becomes another victim for the killer, stabbed in front of their own infant daughter, Anna.

Forwarding fifteen years later, we now see that Anna was orphaned after the ordeal and adopted by Mrs. Goldling, a "medium" who uses the girl to voice the spirits she supposedly conjures up, as well as use her to earn extra incomes via paid trysts from older clients. One of the latter services goes awry one night when Anna, seemingly triggered by something from the past, goes berserk and manages to impale Goldling through a door after she heard a ruckus.

The murder is quickly look into but finds itself on a bind due to lack of proper witnesses as Anna herself has no memory of the incident. She is eventually rescued from prison and taken in by a Dr. John Pritchard, who was present during one of Goldling's seances and believes that Anna is suffering from Schizophrenia, taking this as an opportunity to both study and help her.  Of course, with an unstable trigger taking hold of her now and then, it isn't long before Anna murders as an empty void of violence, leaving a trail of bodies on her wake while Dr. Pritchard tries his hardest to remove her from the deaths and find a way to cure her condition before it is all too late.

Made and released around the time Hammer Films was experimenting with their horror movies in terms of sleaze and gore, Hands of The Ripper comfortably walks between the lines of gruesome exploitation and atmospheric realism, with a few hops around classic Gothic imagery the studio's quite known for. What woks best for the movie, though, is it's strong narrative delving in the topic of science against paranormal with the doctor Prichard character spending most of his time pondering on the possibility that Anna is suffering from a (in this movie's timeline) still being studied mental condition of schizophrenia. This interest in figuring out the psychosis soon grows increasingly concerning as for the character as he eventually faces the dilemma of covering up or just flat out walking out on the increasing death toll his new ward is causing for the sake of making Freud proud and figure out why she does what she does, much to the concern of his colleagues and, at the end, his son and his future daughter-in-law.

This psychoanalytical and moral high ground-questioning angle cleverly gave way for the movie to exploit the severity of Anna's shattered psyche as a few maids and some prostitutes savagely gets the sharp end of things with a lot of blood work and some cheesy set-pieces that often clashes with the serious tone of the more medically-inclined scenes. These kills, nevertheless, showcase some of the best murders from a proto-slasher, many of which violent and pleasingly graphic in detail, and direct the story to some fairly suspenseful scenes that may or may not go along the way you expected.

I guess any real drawbacks here would be the few times that the movie took itself a little too seriously and borders into period drama, messing up the already imbalanced mix of ham and sophistication a tad further only to be remedied by either a good kill or good writing within its solid supporting casts, giving the story that right amount of plausibility. Production-wise, Hands of The Ripper is just amazing to look at with its superb old Victorian sets perfect for back-dropping murder mysteries such as this, highlighting the lavish good of high end bringing, the gloomy desperation of slum work and the grey area between the two. Add a downbeat last act with an even saddening finale (fittingly and wonderfully scored by a then-unknown Christopher Gunning if I may further concur), the movie just ties and presents itself quite nicely as an early jab on the slasher sub-genre, one horror fans could sought for.

My final verdict? Hands of The Ripper (1971) is a fine film for the horror market that deserves our attention for the fair goods it delivers, from budget-surpassing production work to unrelenting streaks of violence. A seemingly near-forgotten gem overshadowed by the Dracula and Frankenstein titles Hammer horror films are known for, its high time we give this movie about Jack The Ripper's estranged daughter a chance for a view or even a spot for our collection.