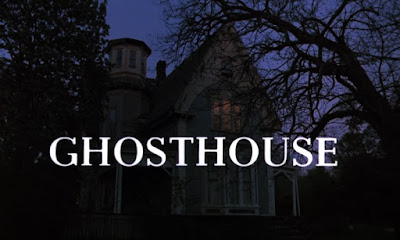 Ghosthouse (1988) is something you would get when a haunted house movie like, let's say, Poltergeist (1982) suddenly gets a body count under the direction of a bad slasher flick only Italians can conjure up in the late 80s. (For this movie's case, producer Joe "Antropophagus (1980)" D’Amato and director Umberto "Cannibal Ferox (1981)" Lenzi. Which should mean we would be seeing a lot of batshit insanity you thought only exists in your wildest fever dreams. Gods help us)

We start this cluster of madness with a girl murdering a cat offcamera in her family's basement, with pops eventually finding out and punishing his spawn by locking her up down there until she learns what she did is cruel and wrong. What follows is a double murder perpetrated by a mostly unseen ghoul with rotten hands, hacking the father's head with a hatchet while his dear wife gets an exploding mirror to the face before being throated with a knife.

Twenty years, ham radio enthusiast Paul tells his girlfriend Martha about the strange signals he have been getting from his equipment, which mostly consists of repetitive carnival music, odd chanting and a couple of people screaming. They soon figure out the location of where the screams are originating from, by which one car ride and one annoying encounter with a hitcher later reveals to be the same -and now dilapidated- house where the opening double murder was committed.

There the two encounter a band of four teenagers, out for your typical horror film road trip and two of whom sounding much alike the screamers from Paul's mysterious radio audio. Now dead curious of what's going on, the two parties decided to help each other out and uncover the truth behind the odd screamings, consequently leading to some weird hauntings involving ghost hounds, stretchy explosive bottles and an evil clown doll, as well as murderous groundskeepers, knife-wielding death specters and a killer electric fan.

As with most guilty pleasure movies, Ghosthouse's a whole lot like a double edge sword; on one end, you have this thing that's not all too well put together and feels more like a hodge-podge of supposedly scary scenes done with the feistiest cheese and questionable (and I think mostly dubbed) acting. Cliches upon cliches of horror tropes are to be expected, from the creaky dark Gothic houses and people investigating weird noises alone only to get murdered, to bloody faucets and a creepy doll and girl combo, while weird scripts make their way through thespians with lines like " You should believe in ghosts, pea-brain". (To be fair, it WAS (again) the 80s) It makes Ghosthouse tedious to watch, honestly, taking a good toll on any of its attempt to build atmosphere and suspense, but the silliness of it all does work in the movie's favor through another angle. The so-bad-its-entertaining angle.

When Ghosthouse goes for the ghoulish and brutal, may it be a bisection from random guillotines or an acid bath that somehow found its way underneath a house, it goes for it with a gut and a sense of energy and creativity to make itself worthwhile after each of its slow moments, leading itself to a fair killcount. At the times it is not violating our screens with gruesome deaths, in turn, Ghosthouse puts its randomness to good use by treating its audience with a cavalcade of  "scares" mostly borrowed from more well known supernatural horror movies like The Amityville Horror (1979) and The Omen (1976), dated and hammy for its effects but laughably fine for good fun.

The film's cinematography effectively captures the moody ghoulishness of its fever dream-like plot, though I find the accompanying composed score to be, while effective when timed properly, a bit repetitive and bordering annoying, particularly the case with the unholy backmasked carnival music emitted by the clown doll. Still, Ghosthouse (1988) is a passable entry to the late 80s incoherent cheesefest that is Italian horror, one that finds a welcoming home among horror fans as a fan favorite midnight movie haunting their video collection. Or late night cable viewing. Far from a masterpiece, but entertaining either way.

Bodycount:
1 cat had its throat cut with a pair of scissors offscreen
1 male had his head split open with a hatchet
1 female gets pinned to a door with a knife through her throat
1 male gets a projected fan blade slice through his throat
1 girl mentioned found left for dead inside a cellar
1 male brained with a hammer, left for dead inside a coffin
1 female chopped in half by a guillotine
1 male found hanged
1 male found dead with a head wound
1 male repeatedly stabbed in the back with a pair of garden shears
1 male hit by an incoming bus
Total: 11
Posted by Kaijinu at 10:37 PM