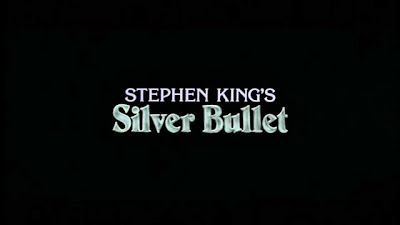 Do you want to know one of the few things that will blow my mind? What if there was a series of slasher films based on each Universal monsters created ala shared universe? Like, in one film, we can have teenagers awakening either a weaponized version of the Frankenstein monster or a warrior mummy, while in another film can have a new age vampire who lost most of his vampiric powers due to breeding and is now forced to find blood to feed on by moonlighting as a serial killer targeting parties at night?

It's a marvel idea and one that I am willing to check out so long as the people behind it are competent, but until then, I guess I have to settle with Humanoids From The Deep (1980) as an exploited slasher-fied Creature From The Black Lagoon (1954); Hollow Man (2000), Hollow Man II (2006) and The Invisible Maniac (1990) as slasher versions of the Invisible Man (1933); and the plentiful titles of Werewolf bodycounters to choose from such as Wolfen (1981), Hard Rock Nightmare (1988) and this, Stephen King's Silver Bullet (1985).

Based on King's novella Cycle of the Werewolf (which in turn was originally planned as an illustrated calendar!), the movie is set in 1976, at a small Maine town called Tarker's Mills wherein a sudden series of brutal killings perpetrated by a either savage creature or a madman (or perhaps both?) begins to thin down the town folks. To be unwillingly caught in this predicament is one Marty Coslaw, a young paraplegic boy who soon got too close on being another victim of the savage. After injuring the beast, Marty somehow discovers its true identity, which unfortunately for him means that the monster isn't going to back down now with its secrets threatened. Thus, a game of cat-and-mouse between a werewolf and a nearly-paralyzed boy begins.

As a horror movie, Silver Bullet is not one to be considered when it comes to complexity as it really is nothing more than a slasher flick with a werewolf for a villain, clawing people to death left and right for the first half before the story slows down into stalker horror territory and then eventually transitioning into an appropriate monster flick-style ending. These tonal differences led to plot holes being plenty and most of the characters prone to bad choices (not to mention a hefty amount of cheese and outrageous set-pieces. A motorbike wheelchair? That's friggin' odd yet awesome! And how about that random werewolf nightmare that just came out of nowhere?), but the pacing is relatively fair and easy to follow, most of the kills are quite gruesome and gory, and there's a lot of scenes that are just fun to watch for the character dynamics or for the gripping intensity of some of the werewolf/villain moments.

Talents involved include a young Corey Haim as our paraplegic young hero who is really just trying to be a normal happy kid despite his condition. I love how natural his performance is in this film and how it goes very well to the other main casts, particularly Megan Follows as his character's frustrated older sibling and Gary Busey, a fun and fitting choice for their  gruff yet lovable Uncle Red, who spits some of the best lines (most of which was ad libbed) in this film.

The only problem I have with Silver Bullet is that, despite starting off very enigmatic with its barely onscreen presence and dishing out some decent killings, the werewolf isn't really that memorable through the rest of the film; not only do the make-up effects used to create the monster look hardly terrifying (making the werewolf look more like a bipedal wombat with rabies, with a head a tad too big for its body), but their motive lacks any real depth nor originality, and its human identity raises more questions than answers. Honestly, I think the twist could have worked better if the reveal was handled a lot better and it wasn't made too soon into the movie.

A simple monster movie down to the core, Stephen King's Silver Bullet, truthfully, could have been better if it had more pizzaz to it but, nevertheless, with its sly sense of humur, a rather easy yet unique depiction of its monster and a lovable main cast, it's a werewolf-slasher hybrid that's quite a fun watch.

Bodycount:
1 male had his head clawed off
1 female mauled to death
1 male pulled into a broken floorboard, stabbed on the gut and mauled
1 boy mauled offcamera, bloodied kite seen
1 male clawed on the back, hurled against a tree
1 male had half of his face clawed off, mauled to death
1 male beaten to death with a baseball bat
1 male brained to death with a baseball bat
1 male shot on the eye
Total: 9
Posted by Kaijinu at 7:04 PM