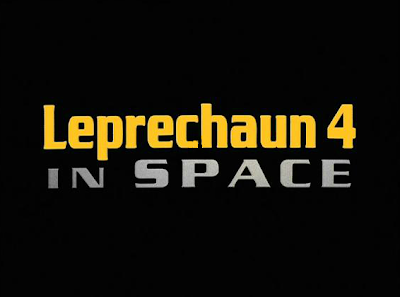 There's a old saying that whenever a franchise goes on making movies, there will come a point that they'll ran out of ideas and just chuck the whole plot in space. Now this is usually a joke but there was some series that thought this is a sell and did exactly just that. So far, I've seen three horror villains given this treatment; Jason Voorhees of Friday the 13th, Pinhead of Hellraiser and, in this review, the maniacal Leprechaun of, well, the Leprechaun franchise.

Some time into the future, the pint-sized devil kidnaps and plans to marry a princess from an alien planet to make him an official royalty, thus granting him...a title, I guess. (What for, though? I'm sure his immortality and magical powers should have been enough to cover any world dominating scheme!) At first the princess reasonably turn down his offer, but after being persuaded by the leprechaun's promises of gold and jewels, she eventually gave in to the idea.

All of this is soon interrupted when a hired military mercenary group was sent to rescue the princess and destroy the dangerous "alien". A gun/laser fight soon broke out and a grenade was tossed, which the leprechaun heroically covers to save his future wife and got blown to bits. Thinking they've won, they haul up with the princess and a few of the Leprechaun's gold, flying off to a ship that's being resided by a  perverted geek and the professor in charge of the operation, who, by the way, resembles a bald German guy's torso implanted on a dalek from Dr. Who. 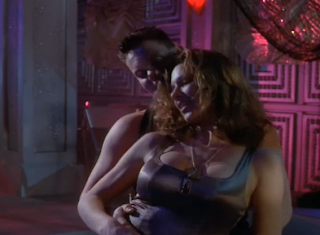 Of course, we know our bad guy's far from dead and the leprechaun magically regenerates himself from one of the marine's dick (don't ask) and wrecks all kind of havoc across the ship, searching for the princess and his gold.

Now, bear in mind, the Leprechaun franchise was never serious to begin with so please, do not ask why the Leprechaun is in space. Let's just say that he's so evil and demonic, he can out live us all and be greedy for all eternity; this being said, Leprechaun in Space is a B-movie slasher parody of many scifi conventions and movies like Alien and The Terminator 2.

With it's odious plotting, Japanese paper-thin characters, and terribly weak script, this sequel simply continues the same bad movie trashiness the prior three Leprechaun movies are known for, although I must admit this entry pushed it light years ahead of itself. This is more of a cartoon than a horror movie, a big joke in space under the vein of having a murderous snowman at the Bahamas ala Jack Frost 2: Attack of the Killer Mutant Snowman, only this movie is a tad better as a slasher. That being said, one of the fun part of Leprechaun is Space is that, from squashed faces to horrible mutation, some of its horror elements looks pretty impressive to say the least, which is something considering its budget obviously looked shoestring tight.

The wit, however, is where the film fell flat; odd to say, the Leprechaun here is less whimsical and more of a straight-forward Freddy Krueger clone as he lost most of his rhyming talents and went ahead in speaking normally for once. This slight change does have its redeeming quality as he can be seen more in the same heights (not literally) of a real slasher villain, although this comes with the price of what makes the Leprechaun character so devilishly endearing in his prior a films. Not only that, but some of the exploitative elements, while simply played out for laughs, it didn't have the same kick one would get on a good B-grade film and pretty much felt just there. I put the blame on the high camp factor, but whether this is a good or a bad thing is up to you.

None the less, I had fun; it's a dumb movie but it's the fun kind of dumb. The kind that gets shoved down a unicorn's bunghole while it's galloping, totally weird yet magical at the same time! Not the kind of film everyone would surely enjoy, but a selective view that appreciates a shlocky silly movie just to have a good time will definitely enjoy the brainless effort that is Leprechaun In Space!

If not, then you are missing the point of this movie...

Bodycount:
1 male hacked to death with a light saber
1 male had his groin ripped open
1 male stripped to the bone by flesh-eating bacteria
1 male crushed by a falling metal crate
1 female falls to her death
1 male had his face flattened by a flying dish tray
1 male electrocuted
1 male frozen by liquid nitrogen, blown to bits
Total: 8