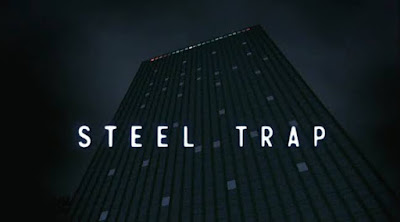 Steel Trap (2007)
Rating: **
Starring: Georgia Mackenzie, Mark Wilson, Pascal Langdale
With a title like "Steel Trap", a video box art featuring a random woman caught in a buzzsaw-infested steel corridor, and a tag line promising Surviving Each Floor Is The Name Of The Game, I ain't gonna blame you for expecting a low budget, Saw (2003)-inspired death game of a movie. Well, it has a game. And deaths. Not a lot of traps, though...

Set on New Year’s Eve, a party is held in a nearly-abandoned skyscraper and we see seven among the crowd receiving a rhyming text invite for what sounds like an exclusive event just a few floors down. Upon getting there, they all find a dinky kid's party set-up with cupcakes and streamers instead, as well as another rhyming clue; some of them find this odd, others wonder if they're in a scavenger hunt with a prize, one of them thinks they're being punk'd by a hidden camera show.
But when one of them gets attacked and murdered by a man in a black mask and suit, it's soon clear to these yaps that they've been lured to a trap, with their cell signals blocked and all means of escaped rigged. As their number continues to snuff out one by one, they'll have no choice but to fight back or die trying figuring out why exactly they're being hunted.

As you can tell, Steel Trap (2007) is basically a run-in-a-mill slasher that sticks close to the classic stalk-and-stab formula, maybe a tad too much as its dose of mystery and elaborate survivalist thrills fail to make itself stand out more for how little effort went into them. It's more of the usual bodycount flair of unlikable and bland characters getting killed by a dime-a-dozen maniac, spending their time alive and in-between kills uttering horribly written dialogue, paired with awkward acting and disarrayed editing. It's a fact that undoubtedly unimpressed many expecting something in the spirit of Saw 2 (2005) or even Cube (1997) based on its misleading marketing, and perhaps those who like their slashers packing more punch as well.

If the cornball characters and their equally corny lines and delivery weren't an odd enough clutter to sit through, the lackluster scares and murder scenes further question this movie's take on workable horror as they're presented with little sense of tension and exploit; they mostly go through a brooding cycle of capture, forget, exposition and then kill, repeating this plot flow like a bad mantra with hardly any bloodshed until the climactic reveal. In all fairness, though, I do love the manic, spoon-fed exposition-filled take of the climax, down to the final act with its very much expected twist and unexpectedly hammed up performance of our surprise mastermind, giving us some last minute worthwhile entertainment before the credits roll.
Perchance, if one is to see this just for the misplaced hilarity of it all, you could say that Steel Trap (2007) is still a fair run for a slasher, albeit very understandably forgettable. It has "they tried" written all over itself and the little effort they put in, the one that actually hits it right, could worth their while, at least as a single night's rental to poke and laugh at. Apart from that, we're really better off watching something else.
Bodycount:
1 male knifed in the neck
1 female hanged on a noose
1 female gets a hatchet to her head
1 male brained to death against a floor
1 female had her heart cut out with a buzzsaw
1 male brained to death with a meat tenderizer
1 male had his throat cut with a knife
Total: 7
Posted by Kaijinu at 11:05 PM