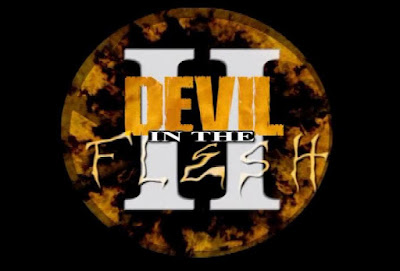 In case you haven't heard of the original Devil In The Flesh (and I am not gonna blame you, don't worry), its a 1998 teen thriller with a bodycount, starring Wes Craven's Scream (1996)'s Death-By-Elevated-Garage-Doggie-Door victim Rose McGowan as the titular "devil" which is teen speak for really obsessive murderous nutjob. Devil does quite fine as a timewaster but its forgettable enough to just be left on its own, which is apparently a sentiment the direct-to-video market does not agree with as there is apparently a demand to see where Devil will lead to next...

On that note, McGowan skipped this entry and her role as Debbie Strang is passed to Jodi Lyn O’Keefe, who starts this film strapped in a bed inside a mental institution while a butch nurse feels her up and her psychiatrist relays enough exposition from the first movie to know why we're here to begin with. (Basically she killed a bunch of people (and a dog) out of temperament. And probably teen angst) Debbie eventually murders her way out before hitching a ride with a rich kid enroute to a college writing course, who in turn soon realizes she just given a ride to an escaped psycho, only to end up pepper spraying herself blind before tripping and getting impaled into some rebars. So far so good for Debbie.

Passing the rich girl's identity as her own, Debbie enrolls to the writing course and befriends an awkward computer geek, as well as starts crushing hard on her professor in that typical increasingly psychotic way. This of course leads to her lashing out on a couple of extras and one potential Final Girl to their deaths, before making her way up to stalking and brutalizing her professor and his lover for a finale that's not all that inspired or exceptional.

To be frank, the entire movie is really nothing that inspired or exceptional. We got a bit of your TV movie stalker drama here, a few Single White Female (1992)-inspired bad roomie cheap thrills there, pepper some cheesy bad one-liners accompanied by mostly bloodless kills within a random wet dream and college kid trepidation, and we get this kinda-entertaining-for-a-single-viewing-only cheapie that really isn't trying that hard to be forgettable. I mean, it's chuckle worthy for the amount of cheese and cliches it managed to work into itself but other than that, Devil In The Flesh II (2000) has nothing much else going for.

Not worth the time to track it down, but feel free to try it out if it is on cable. If you don't like it, the power button (or the channel buttons, I suppose) is just a click away on the remote.

Bodycount:
1 female gets a syringe jabbed to her neck and back
1 male bludgeoned with a book
1 female lands on a rebar, impaled
1 male hit on the head with a nailed board
1 female electrocuted in a shower with a live hair dryer
1 female falls off a building
Total: 6
Posted by Kaijinu at 12:52 PM