Kill Or Be Killed For Our Entertainment?: Keep Watching (2017) 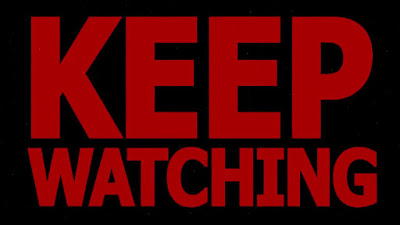 So this is technically Unfriended (2014) if it was a home invasion slasher movie and minus the supernatural hoo-ha and dark satire on cyberbullying. I fail to see the part where I should be ecstatic.

A string of gruesome home invasion murders is getting streamed to the unknowing public by a masked group of maniacs, randomly targeting families apparently via social media.

For this run, their new target is Jamie Mitchell, a moody teenager returning home from a 10-day vacation with her family, consisting of her father Adam, her young stepmom Olivia and her younger brother DJ. Unbeknownst to them, their entire house was scouted, rigged, and left with other unpleasant surprises, for what will be a full night of unexpected terror as the masked killers make their way in, to stalk them inside their own home and stream their struggles to survive for the unsolicited entertainment of millions.

I can make the argument that Keep Watching (2017) has potential should it have played the right cards; the factor that the murders are being broadcasted online may not be new seeing other titles like the cyber-thriller/torture porn hybrid Untraceable (2006) already did this in a much more creative execution (and then some), but I cannot deny that there's still enough life to kick out of this old horse especially with our time's fascination for online culture. Instead, however, the movie decided to with the skeletal route, ditching the potential satire it could have dwindle on regarding modern computer ethics and violence in media by focusing more on the home invasion bodycounting aspect of the plot with little regards on development, coherence and character.

Normally I have no problem with plotless slashers considering I'm a fan of movies like Stagefright (1987) and Wrong Turn (2003), but with its tired pacing and lackluster motive behind the killings, Keep Watching (2017) becomes quite a chore to watch that eventually gets worse when the supposed "fight to survive" was more of watching our protagonist and her family wander around in a dark house for a lengthy (and I mean lengthy) amount of time while our villains toy with them with camera footages and odd noises before killing a few of them and then racking up the killcount through random boyfriends, last minute additions and some of the killers biting it. Add the matter that our main family is so underdeveloped that I find it hard to care about their fate, as well as the kills themselves being rarely creative, and you have this unengaging piece of retreaded horror tropes done and done over.

Exhausting, predictable and an overall disappointment, Keep Watching (2017) just fails as a genre movie in terms of scares and thrills. Ditch it like how the film ditched potential.