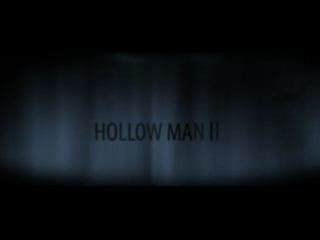 I fondly remember Hollow Man (2000) as a kid for its impressive (for the time) special effects and I still find it a fun watch to this day as an easy-to-digest slasher-friendly modernized The Invisible Man story packaged with hammy Kevin Bacon acting. Hollow Man II, however, didn't came to my full attention until a year or two ago when I finally decided to give it a whirl as a possible coverage for this blog. For the record, I was aware it existed all the way back its year of release but, after sitting through some terrible DTV sequels also made back then (namely Mimic 3: Sentinel and House of the Dead 2), this film was hardly a priority.
After seeing it now, I can honestly say the film's still nothing to lose sleep over, though I wouldn't go as far as claim it didn't come with its set of good points.

Linking itself to the first Hollow Man film by a shoestring, Hollow Man II follows the desperate and murderous escapades of one Michael Griffin (Christian Slater), a soldier-turned-assassin handpicked by the US government to undergo the same invisibility experiment being perfected back at the first film, as he kills his way to get a cure for his condition, finding himself rotting away as his cells slowly dies as a side effect of having too much sunlight passing through his body.

After interrogating and killing a scientist who knows the whereabouts of a formula that'll prevent his body from going full mush, Griffin plans on targeting biologist Maggie Dalton (Laura Regan) next and force her to concoct the cure he's seeking. Unbeknownst to him, the military is now well aware of his rampage and sends out Detective Frank Turner (Peter Facinelli) as an impromptu bodyguard for Dalton without divulging too much info on what he'll be dealing with, which of course leads to Griffin killing Turner's partner and the detective-biologist duo going on the run.

Comparing this to the original, Hollow Man II's budget is noticeably lower but it did find ways to make its invisible assassin concept work with what little it have. In fact, cut out the matter that this movie is supposed to be a sequel and we still get a solid standalone scifi horror thriller with a few decent kills, passable special effects and a serviceable story that expands its own universe quite well. With its stable pace and direction paired with very able casts, this straight-to-video release basically has a smooth and polished look that evokes a few fair scares and tension along the way, a feat no short of impressive on my book.

I guess a better set of kills and attacks would have made me like this film a lot more, but the real nitpick I have here is Slater's uneven take on his invisible killer: during the scenes he is visible, he does an okay job being a creep. Come the parts he is transparent, though, and he suddenly sounds like your typical B-grade homicidal thriller villain from the 90s, cocky and brash with a hint of cartoonish ham. Nevertheless, it dents the film very lightly so, while it is flawed, Hollow Man II is far from being the suspected trash I thought it'll be so many years ago.

Looking past the low grade and cheesy villain, Hollow Man II is a fairly conceptualized slasher that's worth an hour and a half of your time if you have little to do for the moment. Wouldn't say it's a keep, but it does make a fun rental!