The Creaky and The Bookie: The Haunted House of Horror (1969) 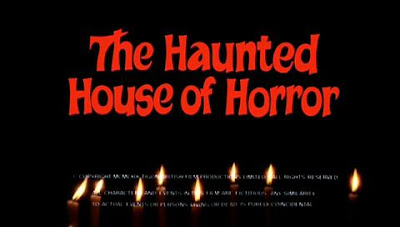 Despite it's title indicating a specter-infested household, this Swinging 60s UK horror has little to do with the supernatural and more inclined to carbon-copying a Hitchcokian thriller to an extent.

We follow a group of young partygoers as they, to get some thrill out of the evening, boogie the night away at a remote and supposedly haunted mansion where a crazed maniac hacked his family to death twenty something years ago. The place's history eventually sparked an interest within the group's macabre side so out comes a seance session and down goes one of them, hacked to death by a kukri-wielding psycho after they split up to explore the mansion.

After finding the body, our friends dread the idea of getting the police involved (despite some protests that they should) as some of them already have records and decide to hide the body and lie about the murder when the disappearance becomes very noticeable. It isn't long before the group's unofficial leader, Chris, tries to play detective as he suspects one of them's responsible, but just how well is this gonna end up when the red herrings are everywhere and the bodycount's rising?

A low-key forerunner to your classic teen slasher, The Haunted House of Horror (or Horror House under some releases) integrates the go-go phase of vintage London with a cheesy yet considerably atmospheric whodunit murder mystery, chucking wooden acting from the likes of a miscast then-teen star/singer Frankie Avalon and a couple of brutal blood-soaked murders. As its direction is more centered on building a mystery, the story can get very slow as we hobble from one police procedural to another, all the while our gang of brightly-clothed 20 somethings squabble over either the identity of the killer (who some suspect to be one of them) or whether keeping the murder on such a low-profile is a good idea or not.

The thing about Haunted House of Horror is that can get considerably atmospheric, interesting even the more it dwells into the identity of our murderer and the panic our little gang is boiling in, but there are a couple of moments where the film can be a mess due to its troubled production, resulting to some continuity errors and post-filming bits involving dumb cops and side-plots involving a stalker being re-shoot and edited into the movie, making the final result barely recognizable from what was originally a more established and focused psychodrama/murder mystery hybrid. As a written and directed debut feature by Michael Armstrong who would later do the notorious cult fave Mark of The Devil (1970), I honestly would like to see how crazed up this film could have been if it was left alone, but I will admit that the killer here was hidden pretty well, though I do wish they could have at least made a better motive for their killings and gave them a better resolution after all of that waiting and talking we have to endure.

It really adds little to what one would expect to get from a 60s psychothriller, but for some people such as myself, this kind of simplicty can be enough to warrant some sort of entertainment. Despite how shoddy the end result is, Haunted House of Horror isn't unwatchable and I might even consider this as a guilty pleasure to just how hard it looks to be attempting to be this smart and bloody horror mystery, even if said horror is few and far in between. It's beautifully shot, I will give the movie that, especially around the interiors of the titular "haunted house" with its gorgeous lighting and Gothic aesthetics. The limping bodies rolling around as they get hacked around also gave what little murder scenes this film have that slice of brutality that's kinda welcome to a very procedural plotting such as this.

Still, it's hard to recommend Haunted House of Horror knowing how much of a missed opportunity this film is, but I'm not going to stop anybody willing to try this seminal dead teenager prototype. If you fancy yourself a cheesy horror movie with 60s swingers getting lopped around with a strikingly bloody blade, then this is a good little title to start with before going treating yourself with the real big guns!