Behind The Walls. Beneath the Floors: The Unseen (1980) 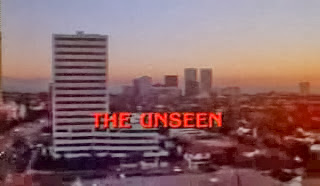 Taking a bit of a break from her abusive footballer boyfriend, TV reporter Jennifer Fast (Barbara Bach) takes off with her two journalist friends to cover a Danish festival at some random Californian town. Much to their inconvenience, however, the festivities drew enough attention to overbook local hotels but a seemingly kind museum owner offers them a stay at his own now-closed Gothic hotel at the edge of the town where he lives with his wife. What he doesn't let on, though, is that something resides underneath the floors and basement of the house. Something unseen until it is too late...

On occasions, when the wind is right, my head is screwed tight and my bullshit-o-meter isn't running at max, I can be very forgiving when it comes to genre films so long as a certain title is entertaining in its own special way. Take The Unseen for instance; it's not the bloodiest slasher title to be released and the story is pretty much Psycho (1960) with a slightly sleazier Hitchcockian feel and a modest bodycount, but the oddly twisted yet simplistic story honestly works for me, balancing between our likable would-be victims and their seemingly disturbed hosts with soap opera quality direction and scripting, all the while treating us with some workable suspense and, frankly, some decent murder set-pieces that didn't rely much on onscreen gore.

I guess the very reason why this film failed to most people's eyes is that while most of the positive notes can be found at the first half of the film, the second half threw a strange curveball that none expected and little are too happy about. Without giving away much, the titular unseen is finally, well, seen and it's barely threatening (pathetic even), leading us to a payoff that pretty much have us watching what's practically a giant toddler terrorizing an unwilling babysitter. Another villain does take its place in the form of Sydney Lassick's character who, in the midst of the story, turns out to be pretty scummy and off his rockers for his scandalous relationship with his "wife" and ultimately ends the former threat with much mushiness as Old Yeller's death before going hatchet happy on our Bach final girl.

The pacing for this last act can get tedious for those expecting a bit much from the twist, but I somehow find catering to my level of strangeness thus I didn't really mind the giant tub of man-child scenes, especially when Bach does a decent understandably frightened victim and the stalk-and-hunt that follows it aren't all that bad. In the end, The Unseen wraps up nicely with a bloody death and a bitter final shot, closing an uneven yet still decent horror movie that oneself earnestly appreciate.

True, it's far from being a hidden gem for most people and I perfectly understand their views of this film being underwhelming, but I think The Unseen still delivers what could as a slasher flick and it at least tried to offer something a bit different and creepier for its twist. May it work on your favor or not, one can at least agree this film is worth a rental or two.

Bodycount:
1 female had her head caught on a floor grate, implied crushed
1 male body seen with a knife in its throat
1 female had her face repeatedly smashed against floor grate
1 male gets a boarded nail against his temple
1 male shot with a shotgun
Total: 5
Posted by Kaijinu at 3:18 PM