Someone Lurking In The Derelicts: Therapy (2016) 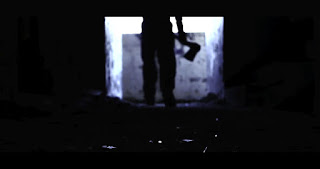 Therapy opens with a collection of camera footages showing three teens drinking beer and spray painting inside a derelict countryside house, unknown to them that another individual is stalking and also recording them as they go about their hijinks. The stalker soon made their presence and captures one of them before (implied) murdering the rest with an axe. 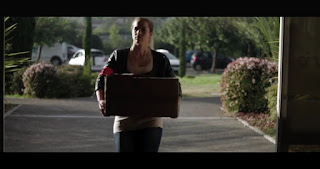 The film then switches to third world view (for now) as police arrives and investigates the same house after following reports of blood being found in the place. Recovered from the building are a series of recordings, something detectives Jane and Simon are hoping to find some answers from regarding to what exactly happened that lead to all the blood works.

Majority of the footages came from home videos shot by a young man named Sebastien, who was recording his family's camping trip for a school project. All was fun and good times for them until later that night, when they suddenly hear screaming from a nearby abandoned house. After catching a glimpse of a roughed-up looking girl from inside the building, the family unwisely enters the building to investigate, only for them to discover that a masked man with an axe is waiting for them... 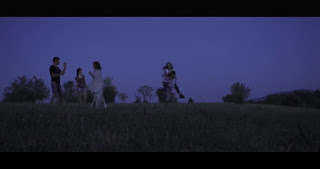 Sounds like your typical hack'n slash? For most parts, Therapy certainly merits its category as a slasher as the film plays out a lot of stalking and killing, though more of the former and the latter being reduced to offscreen carnage, a flaw I often see in most found footage/slasher hybrids. The killer in play also wasn't all that impressive to look at, coming out like a dollar store-imitation of  Michael Myers down to the overalls and white face mask (Heck, when I looked at one of this movie's posters, I assumed I'll be watching a Halloween fan film), and there's not a lot to say about its found footage elements neither as the shaky cam shtick have been done all too many times by now and the use of loud sounds for jump scares offers very little lasting effect. I will, however, commend the movie's use of a derelict building as a setting to garner a damn claustrophobic feel to the story, a little creep factor that I always welcome from my horror flicks.

I guess the only mad dash for originality Therapy is going for is its mystery and, for its worth, it did get me watching in anticipation to where exactly all of this is going when the recordings proceed to show that it is more than your typical "masked killer axing people to death" situation. The only matter of this is that our two detectives, who spent their time watching these tapes with us and theorizing what happened, doesn't show much character apart from being expositions with a name; they are basically just there to bookmark the events before viewing the next set of recordings and whatever history and personality they have weren't really explored properly, one of them just hinting signs of being abused while the other...is simply there. 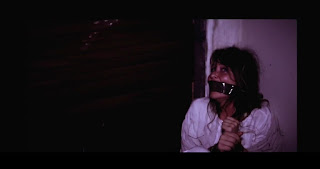 It also doesn't help that the last act failed to be anywhere as exciting as it should be, being a bit dull as not only was the killer's identity lazily spoon-fed to us, but the climax at the killer's abode just felt rushed, lacking any action and further context as to why exactly our villain is doing his MO. (Apart from, y'know, them being crazy) I understand the importance of keeping a villain mysterious for the sake of keeping them creepy, but with all the build up this film went through, you would expect more for our patience. (And money)

Seeing Nathan Ambrosioni, the director behind Therapy, was only sixteen during filming, a part of me wanted to go easy on the kid considering that this is still a pretty solid and professionally movie (one that got theater releases), while another side of me felt underwhelmed as this being the boy's second feature, I expected some improvement. The movie's editing and camera work did bring a couple of eerily nightmarish imagery into play but apart from this, it is mostly routine audio bumps and roller coaster cam, with a side of a dry slasher and a weak mystery. I like to think that maybe lil' Ambrosioni hadn't seen and experienced enough films to learn from and mold a more original feature upon making Therapy, and if that's the case then he does have a long way to go, but I will commend him for making it this far. 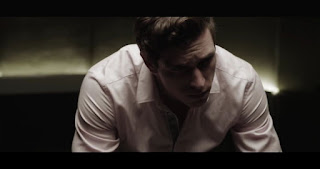 Granted, Therapy may not last much in my memory nor will I lose any sleep over it, it's passable as a quick junk food horror that you can rent for a night just for the brief entertainment it offers.