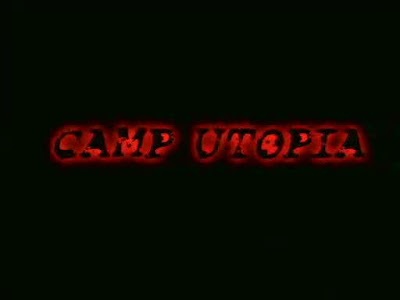 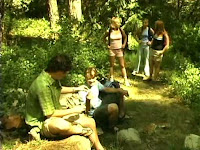 Shot in 2002, released in 2005, Camp Utopia is everything you would expect from a low-budget, do-it-yourself backwoods slasher from start to finish. It follows five teenagers roughing it out in the same woods where in 1969, a commune of hippies lead by musician-turned-guru Timothy Bach set up a small refuge called "Camp Utopia", only to be slaughtered one night by Bach himself after he took some very bad acid. That was 30 years ago  and the horrors of that massacre is about to happen again upon our doomed campers... 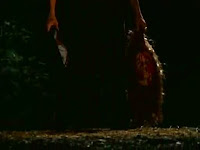 There really isn't much to deal about Camp Utopia (2005); the story is a carbon copy of your basic madman-in-the-woods slice and dice, willed into existing through a nearly-absent budget, inept writing and questionable acting. Its direction is predictable to no one's surprise (like, you can really already tell who the killer is from the beginning of the movie) and as a slasher, it's mostly dry when it comes to its kills with the exception of the somewhat decent flashback showing a drug-infused cult leader massacring his own followers. Basically, the movie is a cheap mess, but it is a cheap mess I find hard to completely dislike. 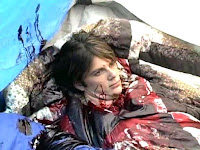 Despite the production looking, sounding and feeling like it barely bothered at all, the unintentional hilarity it brought along at least helps lessen the awkward blow of the movie's low budget. Camp Utopia (2005) is entertaining in its badness in turn, especially whenever the movie tries to be deep and thoughtful with its talks of how the modern generation, with its obsession with technology, is trash and everything is better back in the old Hippie days, only for the bad acting and writing to ham it all up. For many, this might not be enough to make up for the film's majorly uninspired run but if you're not in a demanding mood and would like to see something easy enough to digest and poke fun at, then this a workable saving grace.
Not really going to win the entire crowd over, but the movie is endearing in its crazy bad way and I'll leave it at that.
Bodycount:
1 female decapitated with a machete (flashback)
1 male seen hacked on the head with a machete (flashback)
1 male had his throat slashed with a machete (flashback)
1 male dies from a machete wound (flashback)
1 male dies from throat cut (flashback)
1 male brained with a rock, fell off a cliff
1 male shot to death with arrows
1 female brained with a branch
1 male found decapitated
1 female seen dead
1 female stabbed in the chest with a hunting knife
Total: 11*
*Note: Despite the number of hippies seen getting hacked, stabbed, sliced and dismembered by Bach in the flashback scene, I'm only counting those we clearly saw die as the film itself confirmed only five fatalities from the massacre.
Posted by Kaijinu at 1:40 PM