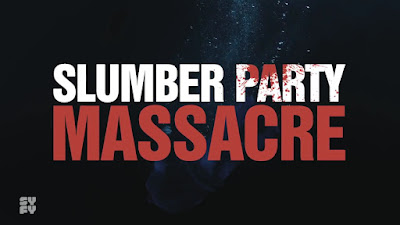 Slumber Party Massacre (2021)
Rating: ****
Starring: Hannah Gonera, Frances Sholto-Douglas and Mila Rayne
As a cult favorite, The Slumber Party Massacre (1982) is known by many slasher fans as a staple of the subgenre, a fine cheesy run on your typical bloody horror story of an escaped nut case terrorizing scantily clad girls while in their lonesome. It is slasher simplicity at its best, though that wasn't always the case as the film's original concept, penned and directed by women, was intended to be a parody of the horror subgenre until the producers had their way and had it filmed instead as a straightforward bodycounter. This 2021 reboot could've gone the easy route of just having the same ploy of partying girls and their boyfriends getting slaughtered by a maniac with a murder-ready powerdrill given that note, but I am glad to say Slumber Party Massacre (2021) went by a mostly different route that delivered promising results.
The movie opens in 1993, at Holly Springs where we see four teenage girls partying out in a lakeside cabin while their brownies bake and a creeper named Russ Thorne (Rob van Vuuren) lurks outside. Armed with a powerdrill, Russ makes quick slayings out of the most of the gals (and one stalker-ish guy) soon enough, leaving last girl Trish (Schelaine Bennett) to defend herself from the maniac and successfully does so by beating the man down into a lake with a boat paddle, leaving him there to drown.

Cut to the present and we now follow Trish's teen daughter Dana (Hannah Gonera) and her friends Ashley (Reze-Tiana Wessels), Breanie (Alex McGregor) and Maeve (Frances Sholto-Douglas) leaving town to attend a party, only for them to run into a few mishaps including Maeve’s younger sister Alix (Mila Rayne) somehow sneaking in to their trip and the car breaking down in the middle of the ride. With no other means to travel, the girls decided to make the best out of their situation and rent a nearby lakeside cabin at (where else?) Holly Springs to have their own little get-together there.
And as you would expect, Russ Thorne arrives later that night, somehow surviving his supposed drowning years ago and have been in hiding since. But little does he know is that these girls have been expecting him; as it turns out, Dana planned their arrival at the cabin to not only exact revenge against the man who terrorized her mother years ago, but to finally put an end to the driller killer's murderous madness as people have been disappearing around Holly Springs. It's a good plan for most parts until, of course, it gets derailed thanks to a nearby group of true crime fanboys getting in the way. Will the girls get to save the guys and themselves while ultimately killing off the serial slayer? Or are they all doomed to face the deadly drillbit of Russ Thorne?

Turning the slasher conventions around, Slumber Party Massacre (2021) tones itself with a positive "girl power" outlook to its story by making its leading female casts aware of the well known slasher clichés usually associated with their demises and utilize them to their advantage, all while still keeping itself grounded as a fun and gory dead teenager flick that doesn't take itself too seriously by healthily supplying us with copious gore, little slices of satire and some intense set-pieces. It's a direction that mostly works here thanks to the writing balancing the serious and the goofy, giving time to flesh out the situation and its characters through some effective dialogue and damn good onscreen talents, all before tossing them into the fray of a classic backwoods horror set-up of teens dying in the woods, courtesy of a maniac with a weapon.
It isn't until a good hour into the run that Slumber Party Massacre (2021), after being pretty open with the fact that Russ Thorne is our driller killer, decided to keep us on our toes with yet another fairly intriguing twist; without spoiling much, we're suddenly thrusted into a whodunnit ploy and everybody is suddenly fair game for the still increasing kill count. It's a whiplash on both the movie's tone and story, one that I openly welcome as it thickens the plot the right way and it eventually leads to a satisfyingly entertaining final fight between not one, not two, but four final girls against a surprise villain!

Granted that some of the satire here can feel too one the nose to be funny and there are moments where the mood can get a bit all over and clashing, the overall gist of Slumber Party Massacre (2021) is that it's still a fun, energetic little slasher that suits well as both a "modern reimagining" and a companion piece to the 1982 original! It's pretty much its own little beast albeit the nods and winks to the entire Slumber Party Massacre franchise and so long as it has gruesome gore, workable characters and a curious story, I couldn't ask for more from a great title like this!
Bodycount:
1 male powerdrilled through the chest
1 female found with a drill wound in the chest
1 female seen murdered
1 female gets powerdrilled through the neck
1 male found with missing eyes
1 male powerdrilled offcamera, body later found inside an icebox
1 male gets powerdrilled in the head
1 male had his face mutilated with a powerdrill
1 male had his throat cut with a machete, repeatedly knifed
1 male ran through the back with a sabersaw
1 female shredded through a car engine
1 female shot in the eye with a nailgun
1 elderly female stabbed through with a drillbit
Total: 13
Posted by Kaijinu at 2:09 PM