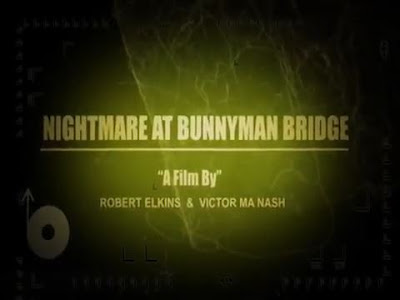 So for those who have been living under a rock, the Bunny Man is an urban legend originated from two Fairfax County incidents at 1970 Virginia involving a man wearing a rabbit costume attacking people with an axe (Or a hatchet), most of which taking place around the "Bunny Man Bridge", a Southern Railway overpass spanning Colchester Road where many would come to believe is the stalking ground of our furry-suited evil-doer.

With a lore like this, you would think a few twisted minds out there would try to capitalize on the backwoods slasher film potential of this legend but, so far, the only recognizable "Bunnyman" movies existing out there belongs to a franchise following a chainsaw-wielding maniac in a bunny fursuit who has nothing to do with the legend. (Most of them aren't even that good!) So it brings me joy to see this rare short flick from 2009 that does understand the slasher flick worth of the legend and actually does a decent job with it in a 19 minute running time.

Taking place in 1974, five hippies were walking down a long road in Virginia's backwoods en route to a music festival when they came upon a passed-out drunk who, after proving to them that he ain't dead, warns them of the Bunnyman bridge and the thing that lurks in them woods. The teens ignore the warning and passes through said bridge, unknown to them that someone's watching and has set on tainting their hatchet with young hippie blood as night falls.

There really isn't much to say in terms of story here as Nightmare At Bunnyman Bridge stands on the bare-bone basics of backwoods slasher plotting albeit on a shoestring budget, shot and edited like a lost grindhouse movie and done with an amount of cheese. Character development is absent, but the film does make up for it with hammed up takes on slasher conventions like doomsayers and campfire tales, as well as letting all the gore loose at the last act where a more cryptic-looking Bunnyman goes hatchet-happy on everyone with delightfully despicably gruesome movie effects. The only qualm I got with this movie is that the twist ending kinda felt out of nowhere, but with the positives outweighing that one negative, it's all good.

Nightmare At Bunnyman Bridge (2009) is a real quick treat for backwoods slasher fans and to those looking for another rabbit-suited slasher that is not about Easter or from that Bunnyman slasher franchise. Nothing grand but watchable all the way to the end!