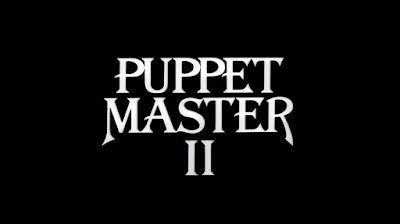 The first Puppet Master movie can be considered as one of the few successful low-budget indies to exist as, in terms of franchising, it not only help put small motion picture productions like Full Moon Features into the picture, but the film itself also rocked a strong cult following. So it wasn't much of a surprise that this film will get its very own sequel with its own set of ups and downs. 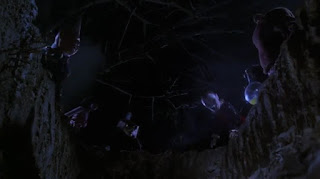 Puppet Master II literally begins with a dark and stormy night, as our five sentient puppets- Blade, Jester, Leech Woman, Pinhead and Tunneler- exhume their creator's grave and revive his body with what remains of the original formula that kept them alive.

Some months later, a small team of parapsychologist enters the Bodega Bay Inn to investigate the murders of the previous film after hearing about it from a survivor. It isn't very long before one of them disappears and another gets a drill through the head, which is soon followed by the appearance of a bandaged Bucharest man named Eriquee Chaneé who claims to have inherited the inn. 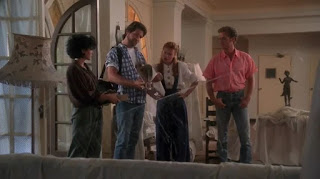 Of course, this Invisible Man-lookalike is none other than the puppets' revived master Eric Toulon and we are eventually made aware of what's really going down: the puppets are weakening so they brought back their old master from the grave in hopes of creating more of the chemical juju that's the very source of their animation, which one of the vital ingredients happens to be human brains. Unknown to our killer marionettes, however, is that Toulon has personal plans for the serum, too.

Admittedly, compared to the first film, Puppet Master II could have a bit more going for it aside from the usual stalking and killing you would expect from a "killer toy" supernatural slasher as we're given some idea to the secrets of our puppets' animation, doubling as a stronger motive to their murder spree this time around. The puppets, in turn, have a more balanced screen time through out the movie and even showed a bit more personality (which will eventually be explored in the later sequels) through better looking prop work and special effects. They're still as colorful of a cast of pint-sized baddies as they were in the original, some of them biting the dust (for now) and even gaining a new recruit simply named Torch. (Because he has a torch for a right hand and I just realize my favorite killer puppets are unimaginatively named.)
Execution-wise, however, Puppet Master II couldn't hide the fact it is basically a re-thread of the first film with its story of random investigators snooping around in the very same inn the original took place at, only to be killed by murderous puppets. Hell, the two films even have the same finale wherein the villain bites the big one after the puppets had taken enough abuse and decided to go against their master. 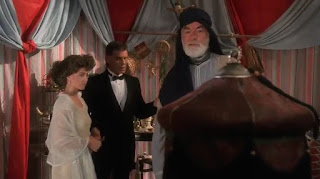 The only difference apart from the now not-so-hidden purpose of the murders and some backdrop on the titular puppet master is that this film took the cheesy route of having cliched love-struck villains as Toulon, longing to be with his late wife, connives a mad plan of resurrecting her by killing a look-alike (as in, one of our protagonists) and transferring her and his souls to giant creepy mannequins. It's horrible in a laughably hammy way, but I could have enjoyed this lame villain motivation a bit more if the rest of the movie wasn't so dull and padding. 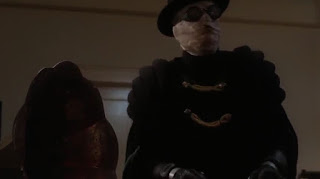 One of the main problems of the first Puppet Master movie is that the human casts weren't really that special. They're there, yes, but their performance were hardly memorable as most of what they did were talk and suspect. (Oh, and have sex. Let's not forget about have sex) Puppet Master II had the opportunity to work on this and do something entirely different, but not only does the still lack of decent acting made this sequel an underwhelming watch for me, it also made the movie feel like nothing really happened much save for more killings and that one shtick about being lovers forever.

Some of folks claim this is one example of a sequel topping the original but taking this with a grain of salt, I beg to differ. It's not unwatchable and it does improved some elements from the first, but Puppet Master II failed to be as interesting as I hoped it'll be and I will leave it at that. Thankfully, I have Puppet Master III to fill out the good sequel void I long from this franchise...