Enlighten The Mind. Feed The Insanity: Beyond The Black Rainbow (2010) 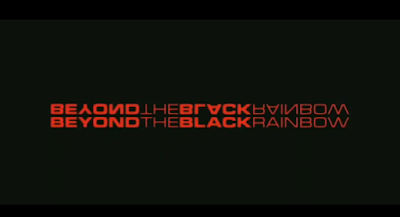 Take the art of Suspiria (1977), the last minute stalk-and-stab of a backwoods slasher, the everything else from a David Cronenberg movie and you get this fever dream tribute to 1980s "scifright".

Some time in the 60s, the Arboria Institute, a secluded quasi-futuristic commune researching ways to merge science and religion, was founded by one Dr. Mercurio Arboria. His work eventually gets passed down to his protege Barry Nyle in the 80s, though the man appears to be less interested in continuing the institute's goal of enlightenment and is obssessed in understanding Elena, a mute girl with psychic powers he is holding captive underneath the building.

On the daily, Nyle conducts psychological experiments on Elena and watches the results in amusement whenever it cause the girl or anyone around her distress. (Or in one ocasssion, death) As he slowly deteriorates mentally, it isn't long before murder, both planned and unplanned, are afoot and Elena gets a chance to escape this horrible fate. But even in her flee, Nyle, deformed and dagger at hand, is murderously on her trail.

More like a fever dream of lights, color and nightmarish visions of otherworldly proportions, Beyond The Black Rainbow sets itself less as a story and instead as an experience given the fact that the plot is pretty basic should you strip away its artistic and psychedelic execution, centering on a steady build-up to Elena breaking free from the institute while Nyle dwells in his own insanity, eventually revealing what started and fuels this psychopathy and how it links all the way back to Elena.

What transpires within the thin plot is a whole lot of imagery, saturated in hues of reds and blues building a LSD trip-inspired dreamscape full of gigantic yet claustrophobic rooms and monstrosities of unexplained origins. Dialogue is nearly absent, relying a good lot on haunting scores and body languages from our two main casts to establish and deliver, adding to the mysterious atmosphere and tone of this film. Whenever words are spoken, however, it mostly dabbles in philosophies of control, power and new age science, showing the not-so-hidden failures of the institute's goal of spiritual enlightenment as one of its results revels in mental torment.

With this strong approach on artsy nightmare fuel, the slasher elements of Black Rainbow are absent until the last act when Elena finally got out. Unsurprisingly with this film's approach, the bodycounting comes almost out of nowhere, with half of the victims being "reasonable" targets while the other half are just random throwaways that happens to be in the wrong place at the wrong time. Oddly even is that the bloodiest deaths happen to these throwaway characters, which I suppose is to reflect our killer's loss of self control over their mind thus the remorseless brutality to these bystanders.

Any flaws this movie bears would be from its own style and direction, as I am sure not everyone would or could be on board to what Beyond The Black Rainbow is or what it is trying to achieve. Personally, the hauntingly beautiful visuals are a treat and the last act slasher horror was a delightful slice of bloodshed but the slow pace can get testy and the lack of a satisfying finale just had me feeling short of any resolution. I highly doubt it's something I can repeatedly view just for fun, but for what it is, I say this movie deserves a viewing for all fans of surreal cinema and obscure scifi horror.