And then I get to see some of his more "confused" works like Aftershock (2012), a gory disaster film wherein we watch a small group of Chilean partygoers, both native and foreigners, try to survive everything from crumbling building structures to escaped murdering rapists during the same night an earthquake hits the city hard. That movie may have been fun to read in paper but execution-wise, I just find it too chaotic to enjoy fully. (I mean the city just have been hit by an earthquake. I'm pretty sure the last thing you wanna do, even if you were a criminal, is to rape a woman or kill people coz, oh, I dunno, THERE'S A FRIGGIN' EARTHQUAKE GOING ON!)

Then there's Knock Knock (2015), a remake of 1977's Death Game that's so uneven with its tone that I find myself uneasy all for the wrong reasons: it has a dumb plot, unbelievable characters even by horror movie standards, and the downer ending just felt too pretentious to be worth the message it tries to relay on us. In fact, this movie should show that we should keep remake projects away from Roth seeing just how bad he might screw them up but of course, we just have to let him do not one, but three remake projects, resulting to the boring 2015 Cabin Fever remake (which I'm sure non-hardcore horror fans wouldn't even have heard about until now and I'm not gonna blame you), the recent Baywatch "movie-fication" and Death Wish remake. 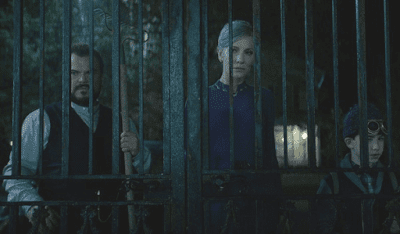 I was hoping his gory Italian cannibal horror tribute The Green Inferno (2013) would be the saving directorial grace that'll restore some faith on Roth but, nope: while I enjoyed it at first, I eventually noticed the uneven tone of the movie and how its unbelievably stupid mid-credit scene more or less say what ruined this film's chances on be better than what it is. Instead, and ironically, his saving grace for me is his newly released movie, which he produced and directed: a PG-13 Fantasy Horror flick starring Jack Black, called The House With A Clock In It's Walls.

The funny part is, I wasn't even supposed to be seeing this yesterday on my day off. I was planning on seeing The Nun (2018) that day but then I noticed the poster of this movie. And it was showing! So I decided my film via coin flip: heads for The Nun and tails for The House. You can tell where this went and, frankly, I'm not that disappointed as you can see, too.

The story takes place in 1955, following the misadventures of a geeky boy (Owen Vaccaro) who lost his parents in a car crash, thus forcing him to move in with his eccentric uncle (Jack Black) who turns out to be a warlock and is friends and neighbors with a witch (Cate Blanchett). After discovering that his uncle's house is magic and that he, too, can become a warlock, we watch as our lead learns all sorts of sorcery and rituals, finding out that not all spells are all fun and games, especially if one of them happens to have Apocalyptic dangers tagging along.

So, this is basically Harry Potter minus the giant castle schools, chosen one mumbo jumbo, and the fact that anything can and will kill you should you step outside said school, and more on attempting to recapture a fun 80s/90s style family-friendly genre flick, which can be seen not only in its little side of practical effects amidst the parade of CG monsters and friendly living furniture, but also in its casts and sometimes incredibly dark story.

Vaccaro plays your typical child hero in these kind of movies: nerdy, excitable and frightened, longing for guidance that he'll soon find in the seemingly unlikeliest of people. Said unlikeliest people is wonderfully played by Jack Black, channeling his inner cartoon again as his booming presence and crazy antics definitely excites this film's target audience (and also terrify them with a certain scene that involves, um, a "body horror of baby proportions". Sure freaked me out to an unsettling snicker.) Playing the straight woman for these two, Cate Blanchett is as elegant as the sly and witty witch she plays, whose childish name-calling between her character and Black's come as adorable as it can be, but at times knew when to grow up and teach these boys a thing or two about inner strength, responsibility and warmth.

As cheesy as that last bit sound, it fits perfectly with the kind of story The House With A Clock In Its Walls. It's mostly innocent and fun, but it doesn't shy away from being creepy and scary at the right momentum, with many false scares thrown in at the beginning where it's mostly magical and fantastic, but it soon dwells into grimier territories as black magic (or as this movie calls it, "blood magic") gets introduced and  suddenly we get a red-eyed zombie warlock and his disturbing flashback involving the horrors WWII and meeting an actual demon, living creepy automatons, monstrous Jack-o-Lanterns and indications of murder. Granted the pacing may have killed off the creepiness of some of these scenes (and I really wanted to see more of that WWII post-war trauma bitter candy), the inexplicable image and idea of the entire world being slowly destroyed by a warlock's tampering of time still warrant a point or two for its originality, especially if the whole shebang links itself to our hero in a much more simplistic and relatable way. 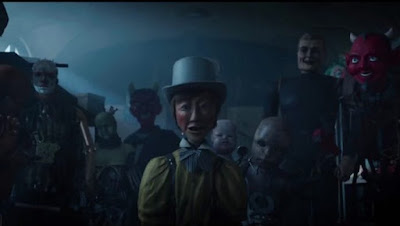 I'm not sure where this movie will lead Roth to, but I will admit I'm quite surprised to how sincere and fun House is. It's nothing really new in terms of plot, the script could use some more panache, and some of the jokes are on the lame side (Oh, look, that flying topiary lion explosively poops dead leaves. Wonderful...), but for what it is, it's campy fun with the right balance of doom and gloom, just the kind of whimsical silly film to lighten up a genre fanatic like me self! So if you're a fan of movies like Goosebumps (2015) or Jumanji: Welcome To The Jungle (2017), then this is a good film to spend an hour and a half with.

Here's hoping Roth's little stab on kiddie horror is a good track for him to try and that we get some great movies from him (again) in the future!
Posted by Kaijinu at 11:16 AM