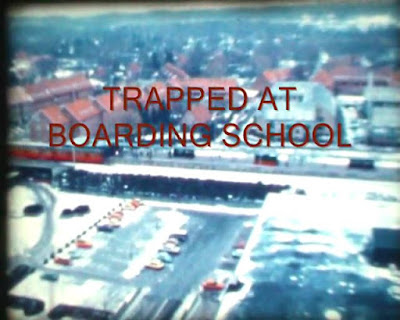 Trapped At Boarding School (Denmark, 1983 Short) (AKA "Attrap 1980")
Rating: **1/2
Starring: Michael Andersen, Søren Børgesen and Erik Jensen
One of the things I enjoy about reviewing slasher films is that, at times, I get to find and watch little rusty gems like this whenever I search for movies to try. 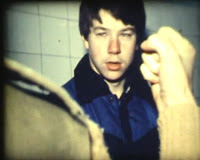 Made in the early 80s by a younger Heini Grünbaum who some of us would remember directed the straight-to-video 2000 Danish slasher Flænset (AKA "Shredded"), Trapped At Boarding School tells a simple, dialogue-less story of a teen enduring his stay at a boarding school as a trio of nasty bullies abuse him whenever they get the chance. One day, the teen had enough, dons a mask and starts stalking them down one by one. 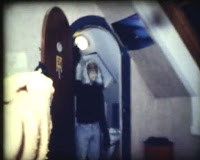 Not gonna sugar coat the low and gritty quality of the movie as this is an obscure 1980s 8MM short edited from a 49 minute original footage, but Trapped At Boarding School does feel a little genuine in its approach of being an easy-to-digest slasher short. Looking past the sun-bleached picture quality, patchy acting and pacing, as well as its cheap editing with John Carpenter's Halloween theme ripped for that extra frugal feel, the short is still a fairly fun watch as an 80s time capsule of do-it-yourself horror effort; the story is quick and easy, the kills are fairly bloody and the direction has a style and vision that at least aim to be creepy and messed up despite the lack of any spoken lines.
It might be a far cry from being a great short, Trapped At Boarding School is at least an enjoyable little slice of foreign vintage slasher goodness that delivers enough bodycounting goodies for a casual horror fan. See it if you like!
Bodycount:
1 male hacked on the back with a hatchet
1 male hacked on the gut with a hatchet
1 male repeatedly hacked on the chest with a hatchet
Total: 3
Posted by Kaijinu at 6:44 PM