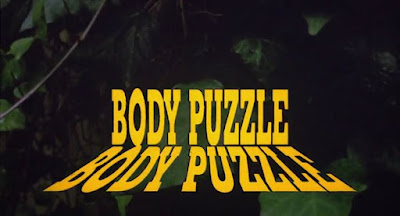 A 90s giallo affair from Demons (1985) director Lamberto Bava, Body Puzzle starts with a frustrated pianist (François Montagut) showing off some talent on the ivory keys as he recalls a tragic rainy night many years ago, involving a friend in a motorbike fatally crashing during a car chase. This flashback somehow ignites a murderous spark from the man and his first victim is a candy store owner who he knifes to death before slicing off an ear. 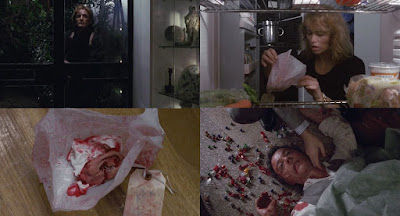 Tracy (Joanna Pacula), a young widow grieving over her brother's recent passing, gruesomely finds out that she has caught the attention of our killer when not only did she discovers the dismembered hearing organ in her fridge, but her late husband's grave was also found defiled and his body missing. This prompts Detective Michele (Tomas Arana), lead investigator of the case, to question her possible ties to the killer as it appears the madman has to have full access to her home in order to leave the body part so easily. Tracy cannot recall or think much of anybody mad enough to twistedly harass her like this, though she fears that she will be targeted next the further this escalates.
And, true enough, the killer strikes again and again, taking parts from each victim and leaving it for Tracy to find, even after she moved to her parent's mansion under heavy police surveillance. Just who is this killer and why is he offering her all of these freshly harvested body parts?

As far as Italian giallo affairs go, Body Puzzle mostly hit its good notes when it comes to horror set-pieces, plenty of them coming from the murders committed by our seemingly random loon for how savage and dark yet outrageous they can get; one moment he's simply knifing a candy store owner to death, next would have him stalking a lady into a mall's loo to hack off her hand with a hatchet or offing a teacher in front of an entire classroom full of blind children listening to some badly narrated fairy tale. There's certainly a sense of finesse and black humor laid out in the film's direction to keep things as interesting as they can be, something I find passable even if the ridiculousness contrasts with the intriguingly twisted conundrum behind our killer's motive a tad too close into poking fun at itself sometimes.
At most, Body Puzzle tries to maintain a straight-faced story despite the cheesier instances. I love the mystery's concept wherein we already know what the killer looks like and that we're just left hanging as to why is he killing people to collect parts from them. Sadly, the abundance of plot holes and incredibly lackluster police work cheapened the impact of the story's development, more so when the movie finally reveals in the near end the twist of the whole situation. Without giving away much, it opened more questions than answer them, one of which being the ineptness of the coroner when they were embalming that body and how much legal trouble would they get for that mistake.

Nevertheless, Body Puzzle remains wholly entertaining albeit its flaws when one would account its unintentional hilarity and cheese. I mean, how often do you find yourself watch a killer hide inside a freezer full of meat (and a corpsicle) for a surprise attack just on that slim chance someone might open it, or have sped-up shots of casual drives be passed as "car chases"? There are times half-witted jiffs like these are what save movies from being dull and this one definitely have more than enough to leave a good impression without completely straying away from being dark, macabre and stabby.
Not exactly the finest giallo out of Bava's filmography (I would bravely give Midnight Killer (1986) and Delirium (1987) that title), but it's a divertingly fun puzzler of a horror thriller to a degree and that's okay on my book!
Bodycount:
1 male killed in a vehicular accident
1 male knifed to death
1 female had a hand chopped off with a hatchet, later found gutted
1 male castrated with a knife whilst swimming, bled to death
1 female had her throat cut, eyes plucked out
1 male crashes unto a car, killed in collision
Total: 6
Posted by Kaijinu at 4:26 PM