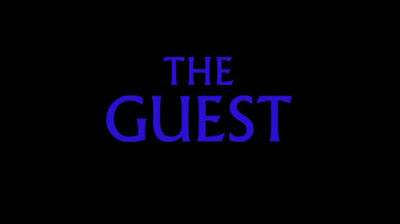 One would remember Adam Wingard and Simon Barrett as the filmmaking duo responsible for the stylish and devilishly fun home invasion/slasher melting pot You're Next (2011), as well as the slow burning yet hypnotizing serial killer thriller A Horrible Way to Die (2009) and a couple of better entries for the first two V/H/S/ anthology horror movies. Now, we'll look into their 2014 hit The Guest, which is far from the standard horror flick you would expect in a slasher blog like this, but it has enough intrigue, kill count and even a few shoutouts to horror flicks to earn a warm welcome here in StickyRed.

Still mourning over the loss of their son Caleb who died in action back at Afghanistan, the Petersons get an unexpected visitor named David one early morning, claiming to be Caleb's marine buddy. He is there to look after them because their late son "asked him to", a promise our titular guest is determined to make good of and a proposition the Petersons were quick to accept.

Well, most of the Petersons: a bit suspicious of this is Anna, the only daughter of the family and now the remaining eldest. She believes there's more to David's near-perfection as a house guest than what he is showing and her suspicions are later proven pin-point, unfortunately, as David has a secret worth killing over and anybody (and I mean anybody) in the way is fair game once he believes he's compromised.

Being frank, The Guest's core plot isn't entirely new if you look back at movies like The Stepfather (1987) and its sequels (and underrated remake), as well as Mikey (1992), Orphan (2009) and many other horror flicks involving suspicious and/or murderous adoptive/adopting family members. It's quite easy to tell that something is up with David's boy-next-door persona and we are eventually made aware of this once he starts talking about acquiring guns in one scene and nonchalantly killing off the suppliers in another. Basically, we are more or less watching a ticking time bomb of a narrative that's scheduled to go off once the climactic curveball is upon us, only the wait is just as fun as the last act it is building to.

What The Guest does that not a lot of its ilk seems to grasp perfectly (or attempted at all) is create a worthwhile diversion to an otherwise predictable scenario. By this I meant that most of the time, movies like The Stepfather or Orphan gave more focus on uncovering the dark secrets of the painfully obvious offending party, molding said offending party into a much more obvious threat that needs to be stopped. In The Guest, however, even after we are made aware of David's potential murder-happy persona, we are still shown a more acceptable side of him as a man looking out for a family and doing a good job at it.

For a good mulch of the time, we see David help Laura, the mother, with the chores, taught the family's youngest Luke how to stand up against his bullies (beating a good number of them up in the process), and may have done something to have Spencer, the father, suddenly climb the corpotate ladder at his job, all of these with an uncomfortably eerie yet somewhat genuine smile and soft spoken persona only Downtown Abbey's Dan Stevens can muster with good looks and charm. It's these awesome moments that made the David character quite a likable chap, thus adding tension and mystery to the plot as we are never solidly sure what he is capable of, what he really is and/or his actual purpose being there until the hour mark. By then, The Guest turns the table against us and kinda recalls its horror elements, bringing forth an odd mix of slasher flick killing spree and action movie shoot'em up.

This transition is far from perfect as we were never given a clear explanation as to why David suddenly goes 360 from his protective big brother mode and go Terminator on everybody's arses. Yes, they did explain he is programmed by something shady and there was supposed to be a scene that go into this in more details, but Wingard and Barrett decided to cut it out to make David more mysterious. So what exactly this programming does or what it is for werenever brought up and this is understandably upsetting for some as it made the David character lazily transformed from a potential anti-hero to something of a slasher villain packing heat (And a box cutter), throwing away all of the development made just for a more explosive and exploitative final act.

Personally, the sudden transformation of both David and the subtle tone of the movie would have been upsetting for me, but seeing the layout of the story was already familiar to me genre-wise, the impact is forseen and though I do wished they planned this twist a bit better, the resulting product is still entertainingly fun and impressive.

What I personally love about The Guest, apart from Steven's portrayal as a first-likable-then-homicidal human weapon, is that it has a grooving retro feel to it from its editing to its soundtrack despite having a modernized setting, giving the entire movie a timeless feel. There's offerings for both thriller and horror enthusiasts in the later carnage as we are given a chance to see David in gunheld action, as well as him delivering some decent kills in both combustive and slicing manner, two in particular (my favorites) involve an unsettling scene where live grenades were tossed at a diner full of innocent bystanders and another at a highschool horror maze in which the film went full slasher movie on us.

Now, if there is anything that I could point as flaws that really bugged me, it'll be the Peterson parent's quick approval of having David around just because he showed little proofs that could have meant anything else. (I mean, did David really got those dog tags from Caleb the way he explained it?) It's a typical horror cliche of "useless/clueless adults" which mostly sets grown ups as deserving meat for the slaughter for being blind of the danger they are getting into and though I get that Mrs. Peterson might be this easily persuaded as she is still greiving over the loss of her boy, I find it too easy for Papa Peterson to be just as easily welcoming after one scene of skepticism. I guess it is a good thing that most of the focus of (kinder) David interactions were on Laura and her son Luke as they were the easiest to relate to and work the best with the kind of plotting The Guest was going for.

A fun genre film that molds the thrilling and the horrifying in one antihero-centered package, I can honestly say that The Guest is a winner in my book, whether its last act works for a lot of folks or not. If you love your good thrillers with a side of horror and character, then this one's a guaranteed definite keeper!