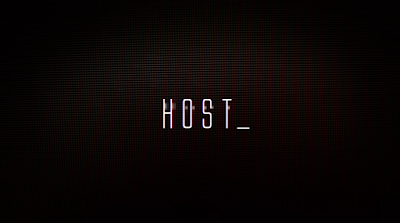 During 2020's COVID-19 pandemic, six friends choose to spend some time under quarantine performing a seance over Zoom,  a cloud-based video conference service. With the help of a medium they invited, it's all fun and games until one of them went a tad too far poking fun at the session, somewhat angering an otherworldly force that wouldn't hesitate to haunt and hunt them all down.

Running only under an hour long, Host is a relatively modest techno-horror feature from director Rob Savage, basically a haunt movie with a bodycount and a "Screenlife" format similar to the likes of the Unfriended series, wherein we watch the entire spooks and carnage through a single computer or phone monitor. Story-wise, the film isn't doing anything far different from the classic supernatural horror plot, with the group dabbling into the unknown with little regards to the possible dangers they're putting themselves in, until that is people starts dying and they're desperately struggling to stay alive. 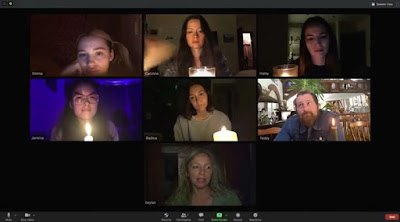 It's scene after scene of horror trappings, particularly of the paranormal found footage variant with its share of eerie focus on darkened rooms, things moving on their own in the background and the generous helping of jump scares. Of course, this style and direction wouldn't work for everyone; some might find the movie's video conference-style pretty restricting or that the gimmick is nothing more than an evolved take on the found footage style, not really offering new aside from a more digital perspective. Others might see its quick pacing has a tendency to go over decent character or warranted plot development, but I personally don't mind any lack of depth in a movie's writing and/or scripting so long as it entertains. And Host entertains.

With a group of decent actors doing a splendid job immersing themselves in the movie's horror and a talented director crafting the scares wonderfully with good timing and setup, Host boasts some genuinely impressive set-pieces from both its fright and murder sequences, some getting quite brutal and intense even without spilling a shocking amount of blood. (Though one did get awfully bloody. Like really bloody) Its cool practical stunt work and the creepy make-up and visual effects used for the villainous spirit and their rampage also further heighten the chill factor of these scenes and the fact that all of this was shot through and presented as a Zoom meeting calls for some ingenuity, at least in an effort to make this film a tad more memorable, relatable and fun as a quickie horror flick that plays around the creepy voyeuristic factor of the horror "Screenlife" approach. 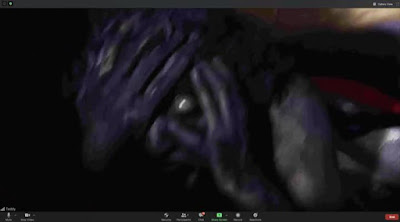 Best watched with a pair of headphones on and with the lights off, Host has the right amount of unnerving content and engaging character to make it slightly more than just another footage horror flick. As cheap and easy as it can be at times, it has its occasions that guarantee goosebumps and a good watch.
Bodycount:
1 male dropped dead from a ceiling
1 female killed, method unknown
1 female beaten to death against desktop
1 female had her neck snapped
1 male set on fire
1 female tossed from a window, crashes into a table
2 females attacked, presumably killed
Total: 8
Posted by Kaijinu at 9:41 PM