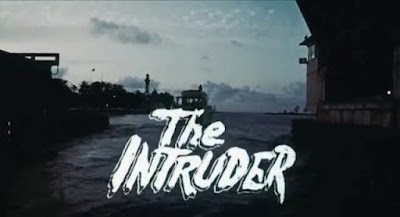 Summoned to an island mansion by a host named Henry Peterson, relatives of Axel Luben were to secretly discuss with Peterson about splitting some gold he found from a plane that reportedly went down in Bogota, Columbia with Luben. The problem, however, is that Henry is nowhere to be found.

Understandably skeptical about the whole shindig, the ten people who turn up decided to keep a watchful eye on the place until their boat returns, believing that Peterson and/or a possibly still-living Luben are hiding in island somewhere and out to kill them all to keep the gold for themselves. True enough, someone is skulking around the island, murdering their only ride home and propping up the bodies of their victim to drive them insane. It isn't long before the group begins to suspect one another, go for each other's throats and the kill count rises the longer they stay in the island.

Basically a play on Agatha Christie's influential novel And Then There Were None, The Intruder (1975) sadly lacks any real excitement as a horror movie as this California-lensed lost film has lackluster mostly written all over itself. In fact, the only thing for me that sparks any sense of interest is the story behind the film's recovery, with its reel and title found some years back from a storage facility housing forgotten and abandoned film prints by Garagehouse Pictures’s Henry Guerro who, along with the rest of the world, never even knew its existence despite boasting Mickey Rooney, Yvonne De Carlo and Ted Cassidy as parts of its casts.

That and a random kung-fu fight at the middle of the movie, involving a rotund karate master and some other guy who's life and occupation failed to strike me as interesting.

As a proto-slasher, its hand-tossed mystery barely has any life in it, sleepily pacing its way through the running time and uninspired murders with much cheesy acting, over-dialogue and absence of vigor. It occasionally woos in some gothic atmosphere echoing Christie's book, though it hardly helps matter that the kills are also insipid, generally bloodless and tame all the way, thus still making the hobble a tiring and stale ride. Any good points left can be found within the film's posh cinematography and the insane level of cheese in its last act, this including the aforementioned kung-fu brawl out that ends hilariously in death and multiple twist reveals, one of which head-scratchingly coming out of nowhere.

Less a full blown slasher flick and more of a low-budget murder mystery, I really wanted to like The Intruder (1975) as a lost gem but the major play of the movie feels so much like a low-end production that I can't help but feel like burying the damn thing back into obscurity. Not a lot else to say about this; the story behind its resurfacing is a fun tidbit trivia for horror enthusiasts but the film itself can lay and rot in the Mojave desert for all I care.

Bodycount:
1 male had his head smashed against a window, body later found submerged in water
1 female found with throat cut
1 male found murdered
1 male found with throat wound, body hung upside down
1 male strangled, thrown off a window
1 male drowns in a lake
1 female drowned in a tub
2 males fall unto a pitchfork, impaled
1 male electrocuted via current
1 female falls off a speeding boat, drowned
1 male shot with a rifle
Total: 12
Posted by Kaijinu at 11:44 AM