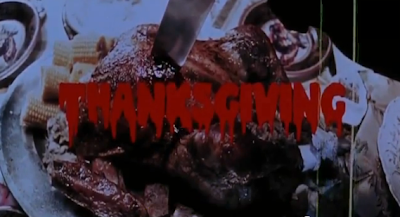 While its feature length version is still a long shot away (like a long long long shot away...), for this Turkey Day, let's review one of the best faux trailers featured in the retro-tastic double bill grindhouse tribute Grindhouse (2007).

Directed by Eli Roth, the trailer focuses on a small town holding its annual Thanksgiving celebration with parades and stuff, until we have our maniac doing what he does best. It's really nothing more than money shots from what could be have been an actual 80s horror flick, with the sensibilities of the more recent slasher entries for its abundance of crudely, over the top scenes such as a trampoline strip show, public beheadings in a crowded parade, teens getting decapitated while making out (TWICE!) and our killer fucking a stuffed turkey.

If this ever was a real flick released in the 80s, it'll probably banned like crazy with all them money shots, but as any wishful thinking a dreamer can dream, Roth made a cult legend out of this two minute fake trailer. I mean not only did the guy know what makes a good 80s slasher fun (blood, sex, craziness and everything in combination) but he's probably one of the few guys who notices how rarely Thanksgiving gets tackled for a holiday killing spree. I mean, yes, we do have Home Sweet Home, but let's face it, that film hardly rocked the holiday slasher scene like My Bloody Valentine did for Valentines Day. As far as I'm concerned, the closest thing we got to a real Thanksgiving slasher was Thankskilling (2009), the story of an evil turkey on a rampage. As much as as that movie was, I would kill to see a bigger budgeted hack-a-thon with the likes of Roth's Thanksgiving.

It might be a while before Roth finishes this flick (if ever) but, so far, let's savor this sweet taste before diving into the buffet. Happy Thanksgiving!