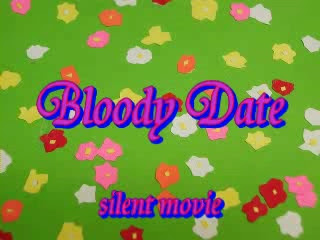 Saw this shocker a few years back when I'm still fresh from highschool. Thought it was freaky and morbid back then, but fun. Youtube user Takena had recently released a DVD compilation of his short claymations, under the title of his currently most popular video Chainsaw Maid, but I wanted to stay true to this blog's contents and decided to do a review on his other "classic", "Bloody Date".

The short started out like any slasher film created; first date gone smoothly until a random axe freak came out of nowhere (well, he did came out from behind their bench), and brutally splits the boy's head open. And I mean brutally! Brain splattered all over her, the girl ran to the woods and finds a small cottage, where a black clad woman and her eye-patched daughter resides. As if that's no indication they meant trouble, said woman brains the poor girl with a hammer until she's knocked out. As you've have guessed it, Axe Freak's with them, and they're killing people for food and for something else that resides in their humble home. That is until our victim fights back.

The twist in the end really got me for the first time, and upon second viewing, it went of as a cross between morbid and adorable (hey, it's clay, blood and guts as it is, clay's adorable...or scary. Depends whether how much Gumby scared the shit out of you as a kid.)

Gore fans may find a chuckle out of this short film. The clay blood and brain matter really splatters in this film, and it even provided some disturbing moments and even a gag-worthy scene of cannibalism. It's a simple shot of animation, with a visual treat of details to match its all time craziness, a fun way to fill up some spare time or even play as a nasty joke on some of yer friends. Takena's next projects are actually better (the aforementioned Chainsaw Maid and his sleaze exploitation take Pussycat boasts better animation, humor and story), but Bloody Date holds my very attention for not only the first video I saw in his channel, but also as one fun slasher animation to boot.