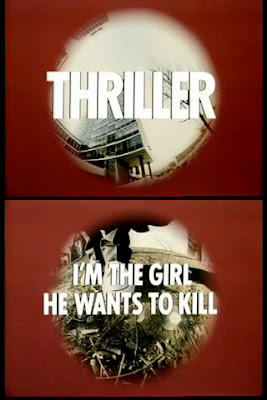 For an episode of a TV series, I gotta say this little hidden gem of the proto-slasher variety has some decently exciting thrills and spills.

What we have here is a simple plot revolving around a loose loonie killing women, armed with a knife and a pair of white sneakers. Detective Sergeant Tanner is on the case and although he has his hands empty of any leads when a partying girl was found murdered at her doorstep and no one seems to notice the killer, he is confident that the killer will strike again.

True enough he does, only this time his crime wouldn't go unnoticed; An American woman named Anne was just coming home from work one night when she saw the man coming out of the flats she lives in. Believing he might just be a neighbor's guest or something, she first didn't think much of the encounter until she finds a murdered woman on her doorstep. Cops are soon called, Anne's questioned for the identity of the man and she gives a responding Tanner a vivid description of our killer with the assurance that he will be caught.

Months go by, the killer remains at large and Anne started dating our good detective. Taking a break from her work one day, she was window-shopping for an engagement ring when she spots the killer working in the jewelers. And to make it more complicated, so did he!

As Anne flees, the killer gives chase. Fortunately, she outruns him and quickly phones in Tanner about her findings, only to be surprised further when her lover tells her that they caught the man.

In a running time of an hour and five minutes, I'm The Girl He Wants to Kill practically plays its proto-slasher plot down to its most basic build, with a little style and flair thrown in the narrative for decent measures.

While it lacks a high bodycount, it makes up for it with an exciting girl-in-peril act in its last half hour, featuring enough chase sequences and pulse-pounding stalk and prowl action as Anne is soon repeatedly stalked by the silent killer after being locked alone inside a building. Her only defense against this madman is her wit and luck, to try outsmarting him in every angle which grows quite challenging for her seeing the killer is quickly earning her tricks. It's all simply realistically thrilling, as both characters bring in and use resources upon resources to try testing one's total control over the situation.

I haven’t seen any other episodes of this series yet but, given the fun quality this entry have, I guess I wouldn't mind diving into the show to see what other goodies I can catch. Although I'm hearing that some of its anthologies aren't as slasher material as this, I can at least say that I genuinely enjoy this little "thriller". A slick, tense and tight proto-slasher, I'm The Girl he wants to Kill is a tele-play worth seeing for you horror junkies out there! Catch it if you can!

(Note, turns out the Americans love their bodycounting as much as I do; The US release of this episode had an extra opening murder, ALA Psycho.)
Posted by Kaijinu at 3:35 PM